The captain of the El Faro rejected suggestions from his second and third mates to alter course as the cargo ship neared a powerful hurricane and the Puerto Rico-bound vessel ended up in the path of the storm, which engulfed the ship and killed all 33 on board.

Transcripts of conversations on the bridge of the El Faro, released Tuesday by the National Transportation Safety Board, show that Capt. Michael Davidson of Windham was convinced his course would take him to the southwest quarter of Hurricane Joaquin as the El Faro headed from Jacksonville, Florida, to San Juan, Puerto Rico, in late September 2015. On that side of the storm, the wind and high seas would be at the rear of the ship, speeding the El Faro away from the hurricane’s eye and the most extreme wind and waves.

But the storm instead moved into the path of the ship, leaving the El Faro northwest of the storm’s center, where it lost propulsion and was hit by winds gusting to 110 mph. Battered by high seas for hours, the ship sank 22 miles north-northwest of the eye of the storm on Oct. 1, 2015. The death toll made it one of the worst maritime disasters in recent years.

NTSB officials said Tuesday that some of the weather reports the crew was working with were outdated. Information from the National Hurricane Center, for instance, was six hours old by the time the El Faro got it, and some weather information had to be plotted by hand, further delaying efforts to track the path of the storm related to the ship’s course.

The transcripts, which cover the last 14 hours of the El Faro’s voyage, show a captain and crew increasingly concerned by the storm’s intensity as they dealt with flooding in a cargo hold – causing cars to bob in the water, prompting dark humor references to submarines – and the loss of propulsion. Davidson finally issued a hasty order to abandon ship, then assured a frantic crew member that he would stay with him, pleading with the unidentified crew member to summon the strength to escape the sinking vessel.

The transcripts are from the voyage data recorder recovered last summer from the wreck of the ship in 15,000 feet of water.

Deb Roberts, Holland’s mother, said she read through part of the transcript Tuesday and was impressed by the crew’s professionalism and attempts to keep the ship afloat until the end.

“They never gave up” on the ship or each other, she said.

The transcripts show that a little more than eight hours before the ship was lost, a third mate on watch on the bridge called Davidson to tell him that the latest weather reports had grown more ominous. He asked if Davidson wanted to plot a more southerly course for the El Faro. Davidson’s response was not captured on the recording, but the third mate tells other crew members that the captain had said to stick to his course.

Around 2 a.m., the second mate also called Davidson in his cabin to ask if the course should be changed. Again, the second mate related to others on the bridge that the orders were to stay on course.

The crew’s calls, as well as the captain’s decision not to change course, are not unusual, said Laurence Wade, a former merchant mariner who was master of Maine Maritime Academy’s training ship. 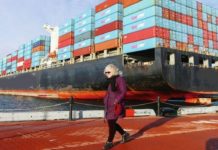 Car Carrier Full of Porsches and VWs On Fire