It could be the relative calm before the peak-season, post-Shanghai-lockdown storm. Or it could be the final unwinding of COVID-era congestion as inflation takes hold. What happens next is still highly uncertain. But as of now, U.S. port queue numbers remain down from highs, reports Freight Waves.

Congestion is easing and increasing in some areas

“This appears to be a much needed respite for some ports that have seen significant delays over the course of the year to date,” said S&P Global Commodity Insights.

“Congestion is easing in [some] areas,” said Flexport. It advised importers to “take advantage of currently available space.”

There were only 25 container ships waiting to berth in the ports of Los Angeles and Long Beach on Friday, according to data from the Marine Exchange of Southern California. That’s the lowest tally since July 28, 2021. As of Wednesday, there were 28 ships waiting. Current numbers are far below the all-time high of 109 ships waiting on Jan. 9.

In late February, ship-position data from MarineTraffic showed 70 container ships waiting offshore of East and Gulf Coast ports. By mid-May, the count had fallen to 45.

As of Wednesday, it had climbed back up to 58. Traffic jams off Virginia and Charleston, South Carolina, are down. The biggest queues now are off New York/New Jersey — 17 container ships — and Savannah, Georgia, where 25 vessels are waiting. Savannah’s numbers are the main driver of the recent East Coast uptick in recent days; Hapag-Lloyd reported only seven ships at anchor there on Friday.

Inbound arrivals could soon increase, according to Sea-Intelligence. If so, port congestion improvements are temporary.

Sea-Intelligence said that offered trans-Pacific capacity jumped 21% from 535,200 twenty-foot equivalent units for departures in the week of May 15-21 to 646,500 TEUs this week.

Ships departing overseas ports this week will arrive by the end of June. Last year, the queue numbers in Los Angeles/Long Beach fell through the third week of June, then reversed, heading back up thereafter.

Asia-West Coast freight rates appear to have stabilized at high levels, at least temporarily, after significant recent declines. The Drewry Shanghai-Los Angeles assessment was at $8,720 per forty-foot equivalent unit last week. The Freightos Baltic Daily Index (FBX) assessment for that route (which includes premiums) was at $10,762 per FEU as of Tuesday.

Peter Stallion of brokerage Freight Investor Services wrote in a market update on Wednesday: “Trans-Pacific westbound has seen a severe erosion of freight rates. [But] forward market sentiment, rather than carrying down any further significant price decreases, has flattened out the curve.”

The calendar-year 2023 futures contract for Asia-West Coast is now trading above the current price, at $11,500 per FEU. That contract price “held steady through the month [of May],” said Stallion.

“This is a drastic change since the start of the year, and indeed through most of 2021,” when current prices were at a premium to forward contract prices. 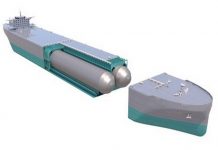