Shipping might not be the sexiest form of transportation in the world, but there’s no…, says an article published on Forbes website.

Shipping might not be the sexiest form of transportation in the world, but there’s no getting away from the fact that it plays a vital role in all our lives.

That is because around 80% of all goods are transported by sea, and as economies around the world start to re-open after the pandemic, boom times could be ahead for the industry.

However, it also contributes around 2.4% of global greenhouse gases each year and, like many other sectors, shipping is now grappling with the question of how to achieve net zero.

The International Maritime Organization (IMO) has agreed to at least a 50% cut in emissions by 2050, although many shipping firms would like to see it go further.

In September, the UK Chamber of Shipping called on the IMO to aim for net zero emissions by that date. And speaking last week in front of the transport select committee in Westminster, the Chamber’s policy director (safety and environment), Anna Ziou said such a goal is “achievable”.

She told MPs: “When we look at future pathways to decarbonize shipping, it is likely that is not going to be a silver bullet and a single technology. It is likely to be a mix of technologies.”

Grasp the opportunity to invest

But in terms of attracting investment to help ship owners decarbonize, Sean McLaughlin, strategy consultant at marine specialists Houlder, told Forbes there is “plenty of private equity money just looking for dirty assets” to clean up. He added many existing ships could soon be classed as those “dirty assets” and without investment their operating life could become impaired.

“The question now for shipowners is do they grasp the opportunity to invest before their asset becomes someone else’s opportunity,” he added.

In addition, McLaughlin said that international shipping has “a loud enough voice to be heard in the financial community”, particularly as charter rates continue to soar.

But the boom in shipping and rising profits creates its own problems, as McLaughlin explained. Money might be there to retrofit clean technology to an existing ship. But taking the vessel out of the water for the necessary time needed might prove to be too expensive for some operators.

McLaughlin said: “I was talking to a relatively small container ship operator last year and they were keen to do adopt different technologies, but then they were offered a 120-day charter, which would have paid them an amount equivalent to the value of the ship. That’s a big challenge in the overheated container shipping market.”

He added there is also a potential issue regarding who funds retrofitting projects, because of the way in which some ships are financed. In other words, would a bank fund retrofitting work if it was not behind the original financing of the ship itself?

Financing of fleet upgrades needs to be more standardized and transparent to share costs and manage investment, said McLaughlin. However, in order to achieve this, it’s necessary to consider how financing and EU initiatives, such as carbon trading, impact shipping.

Other solutions to reduce emissions

Norsepower CEO Tuomas Riski added that while there are plenty of solutions on the market to help reduce emissions from shipping, incentives to implement such solutions are harder to find.

For example, he added energy prices in shipping have been always so cheap, that there has not been much of an economic incentive to fit energy saving devices on vessels.

But he said there can be no doubt that the “world is changing” and energy prices, even in this sector, are starting to rise and carbon pricing is also entering the sector.

He cited the example of mechanical rotor sails, which can be placed on vessels to harness renewable wind energy, which he said had the “biggest emissions reduction potential” of all the retrofit devices currently on the market. The ability to harness wind to reduce fuel consumption and emissions is a natural next step for a cleaner maritime transport industry.

“We have proven that in optimum cases, depending on the vessel’s operational profile, we can reduce the average fuel consumption by up to 25% by just fitting these mechanical sails. It makes sense to start decarbonizing the existing fleet by implementing today’s clean technologies. There is huge potential to increase efficiency and profitability by utilising retrofits in conjunction with other efficiency measures too.”

Greater ambition than its regulator

He added such environmental improvements are essential for meeting the requirements of the Poseidon Principles’ meeting the International Maritime Organization’s emissions targets.

In conclusion, McLaughlin said shipping as a sector has “greater ambition than its regulator”.

He added: “The banks also recognise the value of their loans are at risk if they are not linked to clean ships. My concern is that we need to get clean technology into the existing fleet. One of my favourite analogies is that decarbonization is like a bath filling up with water. Turning off the tap off doesn’t empty the bath. The damage being done by our carbon emissions is cumulative, so we have got to start turning the tap down now on the existing fleet and not just hope we can turn it off completely at some point in the future.” 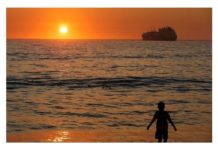 Only 35% Of Shipping Companies Committed To IMO Target

Shipping Subsidy In The Form Of A Tonnage Tax