According to an article published in Reuters, SK Energy’s largest refinery in South Korea, engineers are rushing to complete a new processing unit ahead of schedule as the firm looks to boost sales of low-emission fuels before new marine fuel standards take effect in just one month.

The different approaches come as refiners across the world grapple with the shipping industry’s most drastic fuel transition since it moved from burning coal to oil early last century. 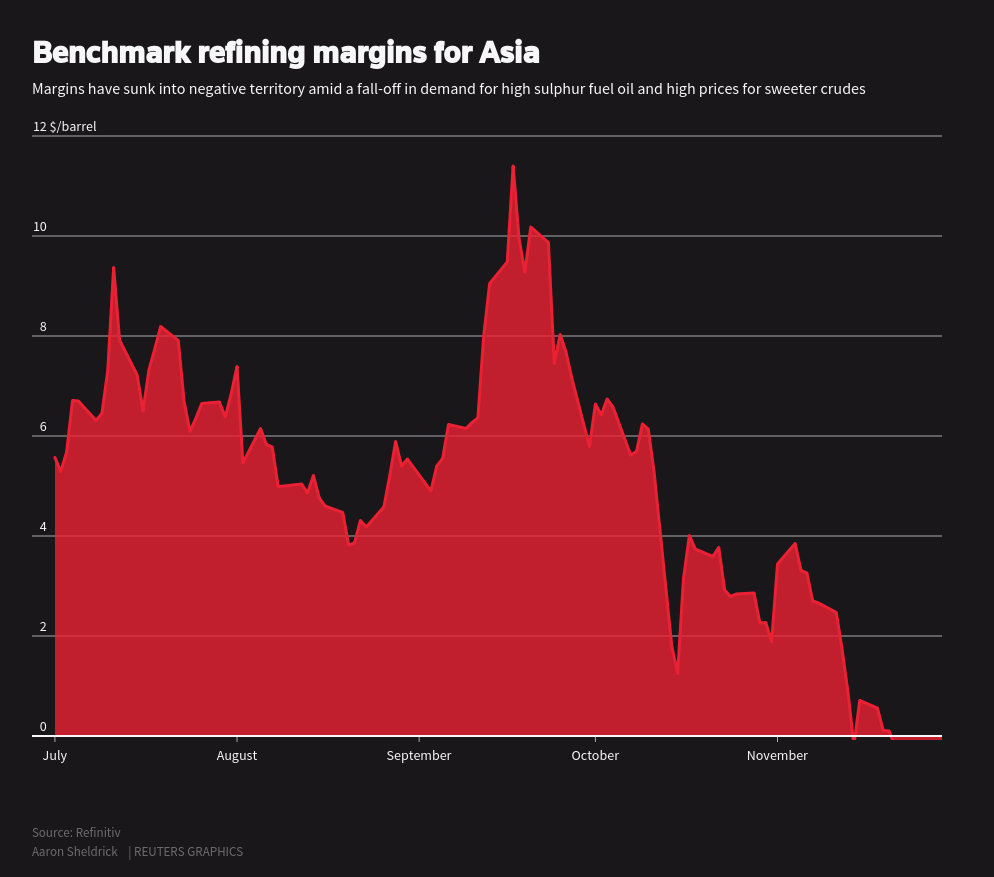 The changes affect demand from 50,000 merchant ships consuming about 4 million barrels of marine fuel a day.

The unit will start commercial operations in March after making fuels on a trial-basis. The refiner has so far relied on its trading arm to create usable blends from a mix of produced and purchased fuels and oil.

With shipping companies delaying fuel orders until the last minute, global refiners do not have clear indications of what fuels will be most in demand. Refiners also have not been able to guarantee the quality and compatibility of fuels they supply, the Chamber of Shipping of America said last week.

Idemitsu to increase its capacity

Idemitsu Kosan is planning to increase capacity at its 190,000-barrel-a-day Chiba refinery’s residue crude hydro-desulphurizing unit, to boost output of LSFO or other IMO-compliant fuels.

However, the company is still assessing demand for alternative fuels and has been blending products to produce IMO2020 compliant marine fuel.

“We will only make selective and concentrated investments in the areas where we see growth or to meet new environmental regulations such as IMO2020,” Kondo said.

Idemitsu plans to spend up to 12 billion yen ($110 million) on the changes at Chiba from next June, a company spokesman said.

The moves are all aimed at boosting profitability amid volatile margins as the market gears up for the change.

Decrease in margins of HSFO

Declining margins on high sulphur fuel oil as demand falls off for the polluting fuel have weighed on overall refining profitability.

Asia’s benchmark Singapore refining margins DUB-SIN-REF, or profits on refining a barrel of Dubai crude oil into products, were at -$0.80 per barrel on Friday after hitting the lowest since 2008 on Nov. 22. Mfame Team - June 7, 2016
0
Watch a video on the U.S. Customs and Border Protection force seizure of 2,000 pounds of cocaine hidden on board a ship on the...
Powered by Pojo Software Pvt.Ltd
This website uses cookies to improve your experience. We'll assume you're ok with this, but you can opt-out if you wish.Accept Read More
Privacy & Cookies Policy
Necessary Always Enabled