According to an article published in Discover Magazine, rafts of garbage, assembled by currents that swirl trash together, clog our oceans. But how did that material wind up adrift in the first place?

Why garbage washes on the remote island?

A new study takes a look at the refuse that washes up on a remote island in the South Atlantic and arrives at a perhaps-unexpected answer: The trash is being dumped from ships.

The findings, published Monday in the Proceedings of the National Academy of Sciences, contradict assumptions that so-called “garbage patches” form when material floats away from beaches or land-based facilities. The research group’s detective work also suggests that ships are breaking anti-litter rules set by the International Maritime Organization nearly 30 years ago.

“The IMO needs to tighten up on ensuring ships use port reception facilities to offload wastes,” says study co-author Peter Ryan via email. He’s the director of the FitzPatrick Institute of African Ornithology at the University of Cape Town, and he studies both seabirds and ocean plastic. Boats docking with suspiciously little trash to offload might deserve more observation, he writes.

There are numerous trash swirls spread in a patchwork across the oceans, and Ryan’s team chose to focus on just one for their study: the South Atlantic garbage patch. Specifically, the group focused on aptly named Inaccessible Island — an uninhabited patch of land halfway between Argentina and South Africa. The island is only reachable by boat and definitely not generating trash. 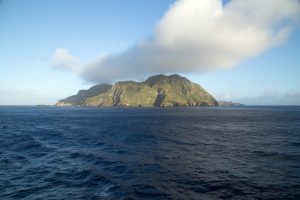 In 2018, the team hauled in waste from the shore and then patrolled the beach for new trash for two months, bringing in nearly 4,000 pieces of garbage. Though they collected all kinds of material, they focused on identification efforts on the most common type of refuse: plastic bottles. The products are stamped with manufacturing dates and have distinct designs that give away their manufacturer.

Of the bottles that washed ashore during the beach patrols and had legible production dates, 90 percent were made in the previous two years. The research team also identified the manufacturer of about half of the bottles — 75 percent of them came from facilities in Asia, and half were from China specifically.

There are two distinct types of marine pollution. On the one hand, there are the beaches around urban centers: the plastics that are found there come from coastal areas and include bottles, bags, and packaging. But these things sink easily and are less likely to be carried far by currents.

Farther out in the oceans, the garbage patches contain fragments of objects of unclear origin, as well as items used by cargo ships and fishing fleets: not just the bottles emptied by the ships’ crews, but also nets, ropes, buoys, crates, barrels, and floats.

“It’s an underappreciated cause of pollution,“ said Ryan.

Half of the great Pacific garbage patch is made up of fishing nets, by weight, according to a report published last year in Scientific Reports.

Oceanographer Laurent Lebreton, one of the authors of the latter report, said that the oft-quoted figure of 80 percent of plastic pollution coming from the land does not apply to the high seas.

He recalled having found huge clusters of nets created by fishing vessels in the North Pacific, known as “fish aggregating devices“ to attract fish.

“Often they don’t retrieve them and they are lost. We have found several tons of them,“ said Lebreton, of the organization The Ocean Cleanup.

“Everyone talks about saving the oceans by stopping using plastic bags, straws, and single-use packaging. That’s important, but when we head out on the ocean, that’s not necessarily what we find,“ he told AFP.

The garbage, then, must be coming off ships. And the sheer quantity implies illegal dumping, he says. “You can’t have that many bottles falling off accidentally and washing up day after day.” Since shipping routes between South America and Asia are gaining traffic, the authors conclude most of the waste is likely coming off-trade vessels like cargo ships.

Similar studies in the 1980s showed most bottles around Inaccessible Island came from South America. But recently, Asia has overtaken them to become the dominant plastic polluter in the region’s waters. Still, Ryan says, to have bottles from the region now dominate the island’s perimeter “is a bit of a shock.” Mfame Team - June 28, 2017
0
Shipping giant A.P. Moller-Maersk, which handles one out of seven containers shipped globally, said a cyber attack had caused outages at its computer systems...
Powered by Pojo Software Pvt.Ltd
This website uses cookies to improve your experience. We'll assume you're ok with this, but you can opt-out if you wish.Accept Read More
Privacy & Cookies Policy
Necessary Always Enabled