The Series of Armed Robberies

Case 1, Belawan Robbery: More specifically, the bulk carrier ‘Strategic Unity’ was at Belawan Anchorage, Indonesia. While at anchor, two perpetrators boarded the ship from the port side anchor chain by removing the hawse pipe.

Case 2, Crystal Auriga Robbery: In the second case, the tug boat ‘Crystal Auriga’ and the barge ‘Crystal 128’ were approximately 14 nm northeast of Pulau Bintan, Indonesia (South China Sea). While anchored off Pulau Bintan, the barge was boarded by an unknown number of perpetrators on 9 Aug 19. They stole some mattress protectors from a container on the barge.

The master discovered that the items on board the barge were missing upon arrival at Crystal Offshore Yard, Singapore on 10 August. He immediately reported the incident to Singapore Port Operation Control Centre (POCC) and Singapore Police Coast Guard. The crew was not injured.

Case 3, Vietnam Robbery: For the third case, the container ship ‘Kota Waris’ was at Phuoc Long Mooring Buoy No. 3, Vietnam. While at anchor, two perpetrators in black mask boarded the ship through the port quarter deck from a wooden boat. They were trying to open the entrance door of the steering gear room. The duty A/B discovered them when he was carrying out deck safety and security round. He reported the incident to the duty officer and raised the general alarm. The perpetrators jumped into water and escaped in a wooden boat. The crew was not injured and nothing was stolen.

Case 4, Johor Robbery: In the final incident, the tug boat ‘Kien San 1’ and the barge ‘Kien San 8’ were about 3.8 nm southeast of Tanjung Piai, Johor, Malaysia in the westbound lane of the TSS in the Singapore Strait. While underway, three perpetrators from two small boats boarded the barge and stole some scrap metal. The master raised the alarm and reported the incident to the Singapore Vessel Traffic Information System (VTIS) via VHF.

The perpetrators disembarked the barge with some scrap metal. The crew was not injured and the tug boat and barge resumed their passage westbound.

Explore more in the following PDF 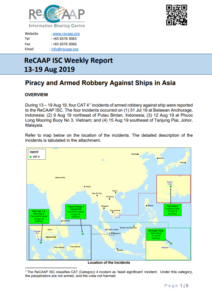 Mfame Team - April 3, 2017
0
Above video shows the collision between a general cargo ship and smaller passenger vessel on the Escondido River. For more information, please visit here Disclaimer: This...
Powered by Pojo Software Pvt.Ltd
This website uses cookies to improve your experience. We'll assume you're ok with this, but you can opt-out if you wish.Accept Read More
Privacy & Cookies Policy
Necessary Always Enabled