Shipowners can reduce the risk of cargo and vessel damage by avoiding adverse weather and peak ocean waves ,says an article published in Riviera.

Weather routeing can lead to better navigational safety and optimised routes if the data is accurate, and ocean data and master experience is included.

But voyage planning and execution needs to consider the experience of ship masters, attendees learned during Riviera Maritime Media’s Linking weather routeing and better vessel operating decisions to save time and money webinar.

He used the example of 14,000-TEU container ship ONE Apus, which lost 1,816 containers during a fateful voyage late November 2020 from east Asia to the US west coast.

There have been many more container-loss incidents since then.

Mr Owen said containers can be lost overboard if ships sail into storms that could have been avoided using weather routeing and ocean information.

Accidents involving container ships crossing the northern Pacific have led to thousands of lost containers due to the impact of high winds and significant wave heights, generating parametric rolling and disrupting a ship’s synchronous rolling frequency.

“The combined effect of wind, waves, ocean swell and the randomness of these all peaking at the same time are peak or spike waves that might exceed 18 m, against a background swell of say 10 m,” Mr Owen explained.

This can happen as often as three times a day in severe Pacific storms and should be avoided at all costs as they “might result in high forces on cargo and their lashings.”

“The concept of spike waves accumulating in such a way three or so times a day cannot be overlooked by ships masters, owners and operators,” said Mr Owen. “That risk needs to be managed and represented in some of the weather modelling being offered to ship masters.”

Mr Owen said these issues can be avoided if weather routeing companies provide the best advice for cargo, ship and crew safety, and not just the optimal route to those hiring the vessel.

“Charterers want their ships across the ocean in an optimised way at a given speed to make a published arrival time on a liner service,” he said.

“But providers of data services may dilute the master’s authority to make the best or better decision for his ship and cargo. Big data is pushing ships and their crew into more hazardous conditions when a traditional ship’s master might have stayed 50, or 100 nautical miles away from a particular storm, adding a few hours to his voyage.”

Mr Owen said masters should feel comfortable “challenging the preconceptions of big data against what they can see from the wind and waves as observed from the ship’s wheelhouse and bridge wing.

“Ship masters should be encouraged to make a stand when the conditions observed on board suggest a more cautious approach to speed, especially when in the proximity of bad weather,” said Mr Owen.

There is pressure from all quarters to maintain arrival times and achieve performance indicators.

“But these will not help him very much when lawyers for cargo interest representing lost or damaged cargo claim he was negligent in putting the ship in harms’ way.”

Ships can use currents to reduce fuel consumption, even if this involves changing route to benefit from them.

“Ocean currents, which are weather-driven currents, are more important when it comes to route optimisation and performance monitoring,” said Mr Brandt.

Tidal current data is more important when sailing close to shore and for port arrivals and departures.

“What is important is the quality of data, where the data comes from, what is done with the data and how it comes to the ship and office,” he said.

Forecast and modelling accuracy depends on the quality and reliability of the initial data. “Route optimisation is based on forecasts. But decisions could be based on data that is unreliable,” said Mr Brandt.

“Seafaring not just about data. It is understanding safety margins and maintaining them at reasonable levels.”

He said shipowners and masters must question sources and data processing and not just rely on algorithm outputs.

“Be curious. Ask where the data comes from, how is it processed and how reliable is the resulting forecast,” he said.

“The output is not to be taken for granted, it is still just a prediction with a varying level of uncertainty which is easily forgotten.”

By collaborating with owners and crews, ship operators and charterers can share weather forecasts and routeing information to improve voyage safety and encourage lower fuel consumption.

“A lot of providers and services focus on chartering departments, leaving shipowners and masters in the dark,” said Mr Brandt. “We need to give the right people the right tools and should share weather data and optimisation processes with the crew.”

He said charterers and owners need to trust trained marine meteorologists to provide accurate forecasts and high-quality ocean data and the “competence of seafarers to make good and safe decisions”. 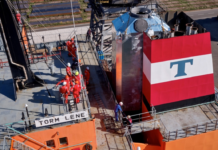