Scientists and doctors were concerned in the early days of the pandemic that infection with SARS-CoV-2 might not cause a strong immune response. Hence infection might not provide long-term protection as reported by NPR.

“Immunity to Covid-19 could be lost in months, UK study suggests,” a headline from The Guardian alerted back in July 2020.

But that idea was based on preliminary data from the laboratory — and on a faulty understanding of how the immune system works.

Now about a year and a half later, better data is painting a more optimistic picture about immunity after a bout of COVID-19.

In fact, asymptomatic infection triggers a remarkable immune response in the general population, likely offering protection against severe disease and death for a few years.

And if you’re vaccinated on top of it, your protection is likely even better, studies are consistently showing.

Here are several key questions people have been asking throughout the pandemic – and ones that researchers are beginning to answer.

If I just had COVID, am I protected against getting a severe course of COVID in the future?

“That’s really important because eventually, every one of us will get infected,” he says.

More data is needed to know how the protection varies with age.

That said, studies in the laboratory also suggest that protection against severe disease is long term after a bout of COVID-19, at least for healthy people.

In that study, immunologist Juliana McElrath and her colleagues measured antibodies in the blood of more than 200 people after a confirmed SARS-CoV-2 infection.

Looking at the shape of the curve, it looks pretty damn good.

“This pattern, with antibodies declining quickly and then plateauing, occurs with any infection, not just SARS-CoV-2, immunologist Deepta Bhattacharya told NPR back in August. “

About six months after a SARS-CoV-2 infection, right around the time when the antibody level starts to stabilize, the immune system does something extraordinary: It generates special cells, called long-lived plasma cells, that can make potent antibodies against SAR-CoV-2, for decades, possibly even a lifetime.

“They’re estimated to spit out something like 10,000 antibody molecules per second.”

Does this mean I won’t get reinfected if I’ve had COVID or even better, have had COVID and am fully vaccinated?

Unfortunately, the answer is no.

“At least all the evidence that we have now says that that’s true.”

“They all infect and reinfect on a yearly timescale,” he says, “so there’s no reason to expect something different from SARS-CoV-2.”

The risk of reinfection is likely very low right after you’re sick — up to about four months or so afterwards, Townsend and his team estimate.

But with omicron, that protection dropped to 55%.

So the chance of reinfection was much higher.

So why is the immune system so good at preventing severe disease but not really able to stop reinfection?

But this strategy may be a deliberate one by the immune system, immunologist Jonathan Yewdell explained last week on the podcast This Week In Virology.

In essence, your immune system is allocating resources.

And its primary goal is to keep you alive.

So the immune system has decided that, with coronaviruses, it’s not worth stopping the infection as long as it can stop serious, life-threatening illness.

“That is good enough under most circumstances,” Yewdell, who’s at the National Institutes of Health, explained.

You might not think when you’re in bed with 106 [degree] fever, you know, and crying for your spouse to help you because you could barely move that ‘this is good enough.’ 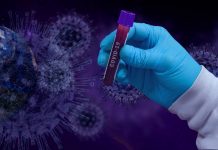