UK MAIB issued a safety bulletin, regarding the investigation of an auxiliary boiler explosion on board the container ship “Manhattan Bridge” to highlight that if signs of waxing in fuel tanks and fuel systems are evident, actions must be taken immediately. A build-up of waxy deposits in boiler burner’s fuel supply filter was one of the likely causes of the flame failure onboard Manhattan Bridge resulting in one fatality and one serious injury in early 2017. At about 2304 on 19 January 2017, an auxiliary boiler furnace explosion occurred in the engine room on board the Japan registered container ship Manhattan Bridge as it was berthing alongside a container terminal in Felixstowe, England. Manhattan Bridge’s second engineer and an engine room oiler were investigating a boiler flame failure alarm at the time and were caught by the blast. The oiler suffered severe injuries and died soon after the explosion. The second engineer suffered burn injuries to his face and right arm, which required a skin graft.

The boiler had tripped out several times due to flame and ignition failures earlier in the day and had been successfully restarted by the second engineer. Fuel samples tested against the latest international marine fuel quality standard identified that wax crystals large enough to block the filters could start to form in the fuel at a temperature of 14°C or below. The air and sea temperature at the time of the accident at Felixstowe was 4°C. The fuel, which was loaded on board 2 months earlier, had been tested against an older version of the fuel quality standard. The older standard did not include a test to identify cold filter plugging points.

The requirement to comply with increasingly stringent low sulphur emission regulations in sulphur emission control areas (SECAs), such as the North Sea, has increased demand for low sulphur marine gas oils (MGOs). Some low sulphur MGOs have a higher paraffin content and are therefore more susceptible to waxing in cold conditions. It is essential that vessel operators carefully consider anticipated ambient air and sea temperatures that will be experienced during the voyage when purchasing low sulphur MGO bunkers. Such information should be used to identify the required cold flow characteristics of the fuel being supplied using CP and CFPP as key metrics. When this is impractical, it is important to establish the CP and CFPP of the fuels carried on board through sample testing.

When operating in cold climates, the risk of waxy residue developing in the vessel’s fuel lines can be controlled by:

The addition of cold-flow improver chemicals to the low sulphur MGO in the vessel’s storage tanks should only be considered as a last resort under the strict guidance of an additive supplier. 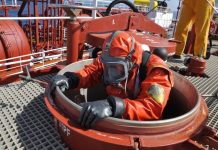 A 11 Point Checklist To Follow While Cleaning Tanks On Ships

Mfame Team - March 23, 2016
0
Agnelli, his wife and two of his children were among seven killed when his aircraft slammed into the building around 18:20 GMT on...
Powered by Pojo Software Pvt.Ltd
This website uses cookies to improve your experience. We'll assume you're ok with this, but you can opt-out if you wish.Accept Read More
Privacy & Cookies Policy
Necessary Always Enabled