The only certainty is high sulphur fuel oil losing its status as the de facto marine fuel choice. But no one can be sure how this low sulphur transition may eventuate.

The International Maritime Organization has not budged on a call it made in October 2016 to cap sulphur content in marine fuels to 0.5% by January 1, 2020, down from 3.5%.

The assumption is that fuel oil with 3.5% sulphur content, or high sulphur fuel oil would eventually lose its dominance in the marine fuel market. Yet vast uncertainty prevails.

No one is of what will replace HSFO in the future marine fuel mix. The other question is how long the low sulphur transition may pan out.

What is the alternative?

The reality is, no existing alternative can be as price competitive as HSFO while information is still vastly lacking on the specifications and availability of low sulphur fuel oil products at ports around the world.

One consensus to have emerged is that low sulphur marine gas oil, is readily available despite being vastly more expensive than HSFO. It is likely to be the option for many shipping companies, over at least the early months of 2020.

This would support a widening of price differential between HSFO and MGO, but as data from two leading price agencies have shown, the marine fuel market has already turned too volatile for any conventional wisdom to hold.

Data from Argus Media likewise reflected a similar trend: the HSFO-MGO price spread ranging from $125 to $175 per tonne since last November is lower compared with the $175 to $250 band seen in 2018.

A consultant with 2020 Marine Energy, pointed to three factors contributing to a lack of HSFO availability that brought about such unexpected price movements.

At the same time, HSFO demand as a ship fuel has remained strong and this low-cost residual fuel will still retain a role, albeit somewhat reduced in scale, in the post-2020 marine fuel mix.

Ships still can use HSFO?

The IMO’s rules provide allowance for ships with installed scrubbers that can remove sulphur content from exhaust gas to continue to burn HSFO after the global sulphur cap kicks in.

As it draws closer to 2020, more shipping companies have announced plans to install scrubbers.

Few homes to the world’s busiest ports, have banned the discharge of wash water from scrubbers within their territorial waters.

This has not stopped South Korea’s Polaris Shipping from signing retrofit deals for the installation of open-loop scrubbers for seven of its dry bulkers.

Lloyd’s List understands that Singapore-based Pacific International Lines has stuck to a plan, disclosed last October, to invest in open-loop scrubbers for several of its large box ships.

Conversely, no shipping company has announced orders of closed-loop or hybrid units that are still allowed to operate within Singapore and China’s port limits. It boils down to economics backing up investments in open-loop scrubbers.

“Shipowners may choose instead to burn HSFO and use open-loop scrubbers in open waters and switch to MGO when their vessels enter port limits,” he said.

Mr Tolson predicted that this is probably the option shipowners may choose to pursue because HSFO would “likely to remain cheap” post-2020.

Thus far, the majority of the roughly speaking 2,500 scrubbers projected to be installed before this year-end will be open-loop units, even after the bans, he said. He added that shipping companies tend to regard scrubber installations as “short-term investments”, budgeting in no more than five-year payback periods.

Additionally, the fact also remains that IMO has not outlawed open-loop scrubbers and this stance is nuanced in a new document introduced for bunkering operation.

The International Bunkering Industry Association’s regional manager, Simon Neo, pointed out that the new bunkering delivery note effective from the start of this year, does not require any declaration on the types of scrubbers installed on ships that are to be loaded with HSFO. 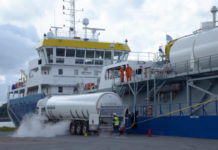 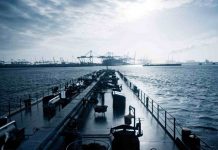