Suez Canal Container Terminal in Egypt’s Port Said had a raging fire last night when COSCO containership crashed into a gantry crane as it was leaving the port.

According to reports, several cranes collapsed or were damaged, with stacks of containers knocked over and some even on fire.  The crane’s boom fell onto containers on the berth, and local media suggests it also hit a fuel tank.  Hazardous chemicals in one of the containers has been cited as the cause of the fire.  More than 20 containers burned and two people were injured in the accident.

The accident is believed to have happened shortly after midnight on Tuesday when the stern of the vessel somehow backed into the crane, causing it to topple and fall.  The Suez Canal Authority deployed fire engines and tugs to the scene and the fire was under control by dawn.

The Suez Canal Authority has had a busy week due to trouble from mega boxships.  Last weekend, the Suez Canal was blocked for about two days after a large container ship ran aground on the southern end of the canal, which required six tugs to tow it out.

The containership is presently moored just outside the port as investigators assess the damage from the incident and the situation has been brought under control. 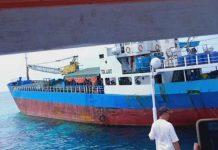 Mfame Team - December 28, 2015
0
https://www.youtube.com/watch?v=8YgwocSX5ds&feature=youtu.be The Captain of a fishing vessel alerted the Coast Guard to rescue his crewmate who was struck in his head by a steel rigging cable....
Powered by Pojo Software Pvt.Ltd
This website uses cookies to improve your experience. We'll assume you're ok with this, but you can opt-out if you wish.Accept Read More
Privacy & Cookies Policy
Necessary Always Enabled