Half a year has passed since the pandemic started raging all over the world and still, one question plagues the mind of most people –  the common folk and experts alike. Why some people don’t show any symptoms for weeks while others have to rage a fever. The American Society for Microbiology’s Science Writer, Christy Harrison tried to investigate that in her recently published article.

Let’s take a look, shall we?

It turns out the answer has at least 2 angles: there’s the virus, and then there’s us.

The coronavirus family is named for the crown-like appearance of surface proteins called spike (S) proteins. Like its cousin SARS-CoV, SARS-CoV-2 uses these spike proteins to gain entry into epithelial cells (and other cell types) via a receptor on their surface known as Angiotensin Converting Enzyme-II (ACE2).This has 2 immediate outcomes: 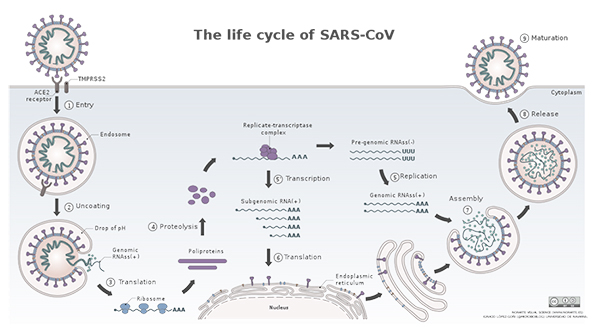 Overview of the SARS-CoV lifecycle. Glycoprotein S, located in the virus envelope, interacts with the cellular receptor ACE2 and the virus enters the host cell by endocytosis.

Thus, when ACE2 function is blocked by SARS-CoV-2, it is no longer available to perform its regulatory roles in the heart, pancreas, liver or other cell types, nor is it readily available to reduce blood pressure.

When ACE2-expressing cells are infected and destroyed by the virus, the tissues as a whole suffer.

The expression and importance of ACE2 in certain body systems echoes the populations most vulnerable to COVID-19.

While most people are not at risk for severe outcomes, the pervasiveness and importance of ACE2 is a liability for tissues already weakened by comorbid conditions, assuming the virus can get there.

The initial reports suggested that predominant symptoms included fever, cough, shortness of breath and muscle pain. Yet a variety of other symptoms have also been reported, including headache, diarrhea, abdominal pain, hepatic dysfunction and even stroke.

Looking in the Wrong Places?

It’s important to note that current modes of acute testing for COVID-19 emphasize respiratory infections, even though it’s possible that active virus exists elsewhere in the body.

This is the equivalent of only looking for your keys in the circle of light offered by a street lamp, because that’s where you can see. If COVID-19 is capable of establishing an infection outside the respiratory tract (and studies suggest that it may be), a nasopharyngeal swab would not necessarily detect it.

Since upper and lower respiratory specimens are the gold standard of acute diagnostic testing, we might be missing active infections elsewhere in the body, or continuing infections that have moved on from the respiratory tract. It’s simply too soon to know how often this is occurring.

SARS-CoV-2 and the Immune System

Once the virus has broken into our cells, it has to contend with the immune system.

While our understanding of the immune response to SARS-CoV-2 is incomplete, we do know that those who go on to develop severe complications of COVID-19 have a few foreshadowing indicators, including high levels of pro-inflammatory molecules, like interleukin-6 (IL-6), and high neutrophil to lymphocyte ratios (NLR).

‘Lymphocyte’ refers to a variety of immune cells, many of which respond to a specific antigen. In that sense, they behave a bit like snipers, in which they seek and destroy a single, specific target.

A study investigating the closely-related virus SARS-CoV found that T cells, a subset of lymphocytes, were an important aspect of viral clearance.

Neutrophils, on the other hand, respond to conserved danger signals common to many pathogens. En masse, neutrophils are the immunological equivalent of a blunt force weapon, capable of causing significant collateral damage.

Animals for which type III interferon receptors have been genetically knocked out suffer neutrophilia, lung injury and death following viral challenge, not unlike the most severe cases among COVID-19 patients.

During a healthy response, a type of lymphocyte called a cytotoxic T cell arriving on the scene might recognize and destroy the infected cell, after which it would be cleaned up by phagocytic cells also summoned to the site. However,  IL-6 and interleukin 8 (IL-8), which are both elevated in severe cases of COVID-19, can promote exhaustion in cytotoxic T cells, which then have less power to perform their normal function or to counteract neutrophil action.

IL-6 also inhibits the development of lymphocytes known as peacekeeper, or regulatory, T cells, which might otherwise dampen a spiraling immune response.

It’s been proposed that what kills at least a subset of COVID-19 patients is actually a blitzkrieg of pro-inflammatory signals referred to as ‘cytokine storm syndrome.’ 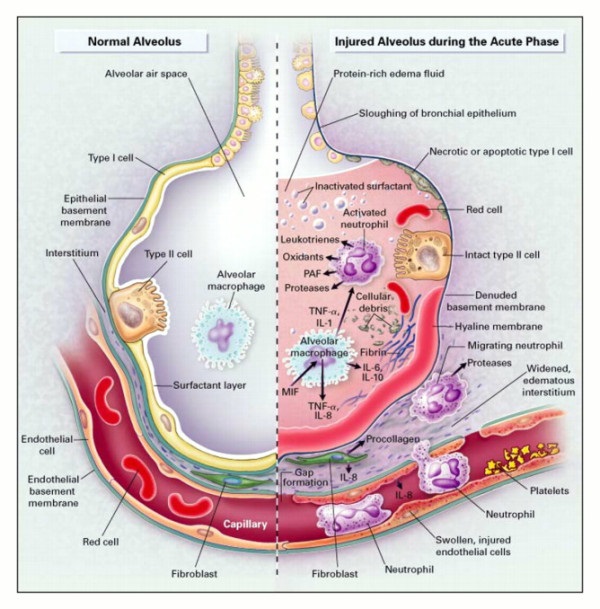 Cytokine storm and Acute Respiratory Distress Syndrome (ARDS) and are a cause of death in a subset of severe COVID-19 cases, in which infiltrates of neutrophils and other inflammatory cells and cytokines overwhelm the alveoli of the lung, causing downstream organ failure.

Bloodwork in severe COVID-19 cases also shows a drop-off in lymphocytes, with simultaneous enrichment in neutrophils, shifting the neutrophil to lymphocyte ratio. Evidence suggests that SARS-CoV-2 may be able to infect T cell lymphocytes directly via their spike proteins, which fuse to low levels of ACE2 expressed on the T cell membrane. Although the virus cannot replicate within the T cells, it does kill them. If accurate, this data suggests that not only are certain subsets of T cells being neutralized by intrinsic signals from other immune cell players, they may also be destroyed by the virus itself, resulting in the lymphopenia we observe in the most severe cases.

Of those lymphocytes that remain during SARS-CoV-2 infection, many display an exhaustion marker called NKG2A, demonstrating that they are effectively unable to mount a response.

Notably, a high neutrophil to lymphocyte ratio is independently observed in many susceptible populations, including those of advanced age, or with diabetes, hypertension and morbid obesity.

SARS-CoV-2 could be exacerbating immunological trends that are already imbalanced in these populations.

Bringing the Picture Together

If the infection is not quickly controlled by the immune system, or spreads to extra-pulmonary tissues, ACE2 may also permit viral infection of other body sites.  In these locations, the effect of ACE2 co-option is felt more acutely by individuals with existing co-morbidities in those organ systems.

It’s possible that the elevated rate of all-cause mortality observed this season may not only reflect undetected SARS-CoV-2 infection, but the diverse array in which its effects on ACE2 manifest outside of the viral pneumonia we recognize as COVID-19.

It’s important to state that our understanding of the virus is still very young. New findings in COVID-19 are emerging daily. As with all science, we will continue to refine and revise our hypotheses as we add data to the story. In the meantime, we should continue to be mindful of vulnerable populations, support continued basic and translational research and doggedly keep on the trail of vaccine and treatment development.

Christy Harrison, Ph.D., is a writer and scientific communicator whose research work focused on gut immunity and the microbiota, along with public health disparities in nutrition.