At least 1500 tonnes of cargo will be dumped at sea during the course of the next few weeks as the South African Maritime Safety Authority (SAMSA) and it partners continue to salvage the NS Qingdao vessel, reports News24.

Cargo to be dumped

The NS Qingdao was evacuated from the port of Durban in October last year after her cargo suffered a chemical reaction and released toxic fumes into the atmosphere.

More than 1000 tonnes of the cargo have been taken out of the vessel, while the remaining chemicals will be removed and dumped by mid-March, according to the maritime authority.

“The vessel is currently anchored off St Helena Bay and an emergency dumping permit has been obtained from the Department of Forestry, Fisheries and the Environment to dump the reacting cargo at sea,” says SAMSA.

“Approximately 1500 tonnes of cargo will be dumped 250km from the closest point to land and in excess of 3000m of water.”

SAMSA adds the vessel didn’t suffer any obvious structural damage, and is expected to return to the closest port after the dumping operation is complete.

An investigation is yet to be conducted to determine the reason for the cargo reaction. “Structural specialists will also conduct an assessment to ensure that the integrity of the vessel is intact before allowing her to sail onward to her destination.”

“The tug ‘Umkhuseli’ continues to act as a safety stand-by vessel. The operation is weather dependent to ensure that the highest levels of safety standards are maintained throughout the operation,” says SAMSA. 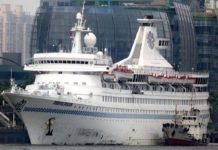