As the week progressed it became clear that the Capesize market wasn’t having a small retracement but was in for a more significant downturn as the 5TC dropped $6,972 week-on-week to settle at $34,542, reports Baltic Exchange.

While Friday’s sharp selloff in the Pacific on the back of West Australia to China C5 fixtures gave clear market visibility, the remainder of the market was operating on low physical activity as dark clouds from the paper market ensured sentiment was poor across the board. The C5 had a small lift on Monday but lowered -2.254 week-on-week to post at $12.173 by Friday. Out from Brazil to China, the C3 followed a similar early uptick to begin the week but quickly started to decline as charterers’ bids melted away with the declining forward curve to settle the week at $26.89. The North Atlantic could only watch the decline as activity in the region seemed virtually non-existent this week. How the market reacts next week will surely dictate whether this is a flash crash, possible buying dip, or something more severe. The Cape size major cargo, iron ore, has been on a tear this week reaching the $220-230 pmt levels which may help to underpin owners’ optimism for strong demand for their vessels in the weeks ahead.

It proved to be a negative week overall for the Panamaxes with rates easing across the board, any potential momentum early on was somewhat disrupted by many holidays towards the latter part of the week. The Atlantic was predominantly fronthaul led with a steady cargo flow ex NC South America with an 82,000-dwt achieving $26,000+$1.7 million ballast bonus delivery US Gulf. However, with an easier looking trans-Atlantic market the nearby Med positions came under pressure with reduced rates appearing. In Asia, exports from Indonesia continued to thrive with healthy volumes throughout the week, $32,000 agreed on an 82,000-dwt delivery mid China. But Singapore holiday on Thursday curtailed trading somewhat with rates eroding to closer to $30,000 and under for such a trip. Period activity included an 81,000-dwt delivery mid China position concluding at close to $24,000 for one year’s period with sustained support for the rest of this year into next.

Despite widespread holidays, sentiment remained firm from the Asian basin with tonnage supply remaining tight. However, there were mixed signals from the Atlantic with limited fresh enquiry from the US Gulf and Mediterranean, where rates eased early in the week but levels remained steady from the south Atlantic. On the period front, a 63,000-dwt open Japan was fixed for six to eight months at $28,000 and a 51,000-dwt open Mediterranean was heard fixed for four to six months Atlantic trading at $23,000. From the Atlantic a 55,000-dwt was fixed at $19,750 from the US Gulf to central Mediterranean. Further south a 58,000-dwt fixed delivery Recalada for a trans-Atlantic run at $30,250. From Asia, with the strong sentiment a 54,000-dwt was fixed for a trip delivery China via South Korea to Continent-Mediterranean at $26,000. For Indonesian business a 58,000-dwt fixed delivery China via Indonesia redelivery China at $29,000. From the Indian Ocean an Ultramax fixed delivery Haldia via east coast India redelivery China at $34,500. 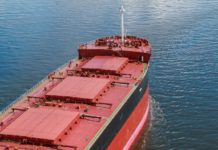