The Ship It Zero coalition has urged shipping companies to cancel all new fossil fuel newbuilds in their orderbooks and invest only in zero-emission technologies and fuels for their future global fleets, reports Offshore Energy.

On 23 May, the climate and public health campaign that seeks to move the world’s largest retail companies to 100% zero-emission ocean shipping, sent an open letter to chief executive officers (CEOs) of five large ocean carriers. In the letter, the campaign urged the CEOs to invest profits in reducing fossil fuel use and catalyzing the shift to zero-emission vessels.

United Nations IPCC report Climate Change 2022 Mitigation of Climate Change released last month makes clear the world must immediately be reducing global GHG emissions from current levels. It states that we have just eight years left to halve climate-disrupting emissions from 2019 levels and warns that continued investment in fossil fuel assets and infrastructure will lock-in high emissions, the coalition wrote in the letter.

“Investing in new fossil fuels is moral and economic madness.”

Moreover, the World Meteorological Organization warned on 9 May that there is a 50:50 chance of global temperatures reaching the 1.5°C threshold within the next five years. As already known, the international shipping industry accounts for 3% of global greenhouse gas emissions, making it one of the world’s top 10 climate polluters.

Air pollution from the heavily-polluting cargo ships has been linked to 6.4 million childhood asthma cases annually and contributes to over 250,000 premature deaths in primarily Black, Brown, Indigenous, poor, and working-class neighborhoods. On its current trajectory, shipping is expected to comprise 17% of global greenhouse gas emissions by 2050.

According to Pacific Environment and Stand.earth’s Cyber Monday 2021 report, Shady Routes: How Big Retail and their Carriers Pollute along Key Ocean Shipping Corridors, the abovementioned companies are among the top maritime polluters among companies that ship to the United States, responsible for at least 11,994,007 tons of carbon dioxide emissions from 2018 to 2020.

“We agree with the words of UN Secretary Guterres: Continued and increased investments by your companies in brand new fossil fuel assets at this critical time in global climate history is indeed moral and economic madness.”

“This statement holds particularly true for LNG, as the IPCC finds that methane emissions must be reduced by 33% by 2030 in order to have a chance to stay within a 1.5°C emissions pathway. For the shipping and aviation industries specifically, the IPCC report finds that “natural gas-based fuels are expected to be inadequate to meet stringent decarbonization goals for these segments (high confidence).”

These findings build on analysis from the International Council on Clean Transportation that found that LNG-powered ships emit between 72-80% more lifecycle greenhouse gasses than diesel-powered ships in the short and mid-term.

“For these reasons and more, we urge you to only buy and build new ships with 100% zero-emission ship propulsion fuels and technologies from well-to-wake – in addition to taking immediate action to retrofit existing ships in your fleets to reduce their climate and air pollution. In considering carbon neutral fuels, fuels should be evaluated on a “lifecycle” basis, i.e. from extraction or production, through processing, to emissions resulting from use on board. This must include any leakage, slips and venting throughout the lifecycle of that fuel. All greenhouse gases (GHGs) and co-pollutants like Black Carbon must be accounted for, not just CO2. Finally, carbon offsets cannot be included as a part of a viable decarbonization pathway.”

While there is no one silver bullet to decarbonize the maritime sector, there are multiple options both currently available and as emerging technologies and fossil-free fuels that will reduce and ultimately eliminate greenhouse gas emissions and air pollution from international shipping. These include efficiency retrofits, shore power, green hydrogen-based fuels, batteries, and wind.

“We urge you to invest in and rapidly scale up the use of these technologies in your global fleets,” Ship It Zero stressed.

“The global shipping industry has and can continue to play a significant role in advancing global technologies and markets that benefit communities around the world. We must have a livable planet in order to continue to realize those benefits.” 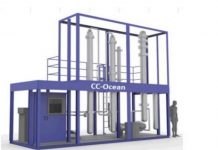 Can We Achieve Full Decarbonization By 2050?