A crew member aboard KM Yuliner was killed while four others were missing when the cargo ship burst into flames off the coast of South Buton regency in South-east Sulawesi, Indonesia, reports The Straits Times.

One survivor has been recovered. The Kendari National Search and Rescue Agency (Basarnas) has since deployed personnel to find the missing people.

“We are carrying out a search operation for the four missing crew members. We have enlisted the support of fishermen based in the region, but so far there are no signs of the crew members,”

KM Yuliner, which was carrying cement, left for Wakotobi regency in South-east Sulawesi from Pangkep Port in South Sulawesi on Tuesday.

However, the cargo vessel caught on fire midway through its journey. The cause of the fire remains unclear at the time of writing.

Both the survivor and casualty were found 18 nautical miles west of the vessel’s last known position.

The team deployed by Basarnas is currently combing the location in the hope of finding the missing crew members.

“We hope we can find all of them regardless of their condition,” Mr. Aris said. 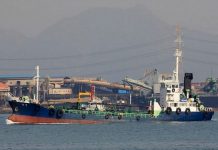