The ship is the second of Carnival Cruise Line’s vessels to deploy LNG, and pays homage to the cruise line’s 50th birthday.

Carnival Celebration is Carnival Cruise Line’s second cruise ship to run on LNG – and will benefit from new port facilities.

It is the second of three Excel-class ships and joins Mardi Gras, sailing from Port Canaveral, Florida and Carnival Jubilee, set to sail from Galveston, Texas in 2023.

Carnival’s newest and biggest class of ships run on LNG.

LNG is mostly methane and produces no sulfur dioxide, reduces the production of nitrogen oxides by 85% and reduces particulates by 95 to 100%,” says Mr Pruit.

Explaining the close link to the cruise company’s newly designed port facilities, Mr Pruit says, “Enhancing Carnival’s port facilities in PortMiami was a key part of our plan to operate Carnival Celebration there and accommodate the new technologies and processes needed on shore to bunker a ship powered by LNG, which is better for the environment.

Terminal F has been completely redesigned and reconstructed so it could be better equipped for the new ship, including future connection for shore power.

“We carried out a similar practice related to LNG bunkering in Port Canaveral to bring Mardi Gras there last year, building an all-new terminal, and we are currently constructing enhancements to our port facilities in Galveston as well in preparation for Carnival Jubilee’s arrival next year.”

Mr Pruit says, “Ship-to-ship LNG bunkering is necessary because it allows for efficient refueling and provides the amount of fuel needed.”

On board, LNG requires special handling. It must be stored at -126°C. Mr Pruit says three tanks built into Carnival Celebration, much like its sister Mardi Gras, hold the fuel at that temperature until it is ready to be burned in the ship’s engines.

He adds, “Our Excel-class engine room consists of a quartet of large 16-cylinder engines that burn natural gas similarly to those that burn diesel fuel.”

Other environmentally friendly features include breaking down all solid food waste on board.

Carnival says it is the first cruise line to have bio food digesters operating full-time across the entire fleet.

Bio-digesters reduce the food waste generated on board into an environmentally friendly liquid that can more easily be lawfully discharged.

Carnival Cruise Line spokesperson Matt Lupoli tells PST, “One of our 2030 sustainability goals is to reduce food waste production per person (30% by 2022 and 50% by 2030), and we are on track to achieve our 2022 food waste reduction goal.”

One zone, 820 Biscayne, on the ship celebrates the culture, architectural styles and flavors of Miami – the home city where the line was founded in 1972.

Another zone, The Gateway, celebrates travel and the excitement of exploring new destinations while honoring Carnival’s evolution of ships by featuring artifacts from former ’Fun Ships.’

Inside their cabins, guests will enjoy an array of architectural features and designs that will enhance many aspects of its balcony, ocean view and interior staterooms.

The ship’s staterooms were developed in partnership with DCA Design International, a leading product design firm based in Warwick, England, that works across consumer goods, travel and transport, commercial, and science and technology sectors.

Carnival Celebration and its Excel-class sisters feature the widest variety of accommodations of any Carnival ship class – with more than 70% of staterooms featuring an ocean view or balcony, along with 300 pairs of connecting staterooms, for large families or groups.

The Excel class also features the most suites of any Carnival class, with more than 180 of varying size and locations, including the premium level Carnival Excel suites – 32 suites in four categories which all include a set of exclusive features and offerings.

It is also the second Carnival Cruise Line ship to offer BOLT, which was the first-ever roller coaster at sea when it debuted on Mardi Gras last year.

Just like on Mardi Gras, Carnival Celebration’s BOLT is an all-electric coaster featuring a two-person car travelling at speeds of up to 64 km per hour on a 244-m track full of drops, twists and turns 57 m above the water line.

BOLT is designed and built by Maurer Rides in Munich, Germany.

It was first assembled on land, and shoreside test runs were conducted. It was then re-assembled atop Carnival Celebration in Finland as the ship’s construction was underway.

Mr Lupoli says, “Several engineering challenges faced the construction of BOLT, including the unpredictability of operating the ride on the water.

Conventional gravity roller coasters on land are not able to cope with the unforeseeable motions of the sea.

That’s what makes the ride’s powerful electric motor all the more necessary to propel it along the track.

BOLT’s vehicle system makes it possible for guests to control their own journey on the entire track – with the vehicle allowing the riders to set their own speed.” 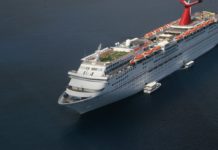 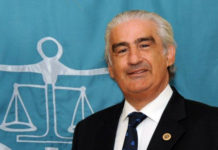