Refining sources told S&P Global Commodity Insights on March 22 that some Chinese state-owned refiners have returned to the Russian spot market to buy May-loading Urals crude barrels, enticed by their historic discount to Dated Brent as reported by S&P Global.

“We will have a shipment of Urals for delivery in June, and the price is fairly low,” a state-owned refinery source in southern China stated. According to S&P Global Commodity Insights’ Platts estimate, the discount for a Suezmax cargo of the Urals against Dated Brent rebounded somewhat to $32.675/b on a FOB Novorossiisk basis on March 21 from a record $33.36/b on March 15.

“The shipment price for CFR China is roughly $17/b cheaper,” the refining source stated.

Other Sinopec and PetroChina refinery sources in China’s central, east, northeast, and south stated the price was enticing, with some claiming the businesses were seeking for ships to transport the barrels.

“One of the current problems is fixing a ship to carry Russian barrels, as not many shipowners are willing to take the risk,” a refiner source with PetroChina said.

China had stayed on the sidelines of the Russian spot crude market for a while due to the payment and shipping uncertainties generated by the Russia-Ukraine war.

It was only around March 14 when Indian refineries were reported to have taken the crudes that sources with Chinese state-owned trading firms said China’s crude buyers would return to the spot market to buy the Russian Urals.

Unipec is the trading arm of Sinopec, which is a leading Urals buyer in China.

China is likely to import about 3.52 million barrels of Urals in March, which were loaded in January and all taken by Sinopec, Kpler data showed.

According to Kpler, cargo arrivals in China in April, which were loaded in February, would increase to 4.03 million barrels, with Sinopec continuing to be the leading buyer.

Independent Chinese refiners were reportedly reported to have begun taking the Urals, with merchants claiming that purchases were made surreptitiously to escape public scrutiny.

According to data from China’s General Administration of Customs, Russia was the second-largest crude exporter to China in January-February, despite delivery volumes of ESPO, Urals, Sokol, and Sakhalin Blend declining 9.1% year on year to 1.6 million b/d. 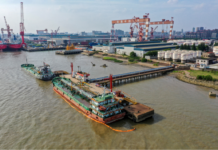