Russia’s ocean container imports continue to collapse as shipping lines wind down the last remnants of their services to the country’s ports. Russia — now effectively a pariah within Western logistics circles — still has cargo import options. Yet the loss of virtually all of its ocean shipping links makes obtaining consumer goods and components much more difficult, reports Freight Waves.

The world’s top container lines paused bookings to Russia in the days after the invasion of Ukraine. However, some service continued, including efforts to evacuate liner-owned empty containers from Russian ports.

In the third week of April, automatic identification system (AIS) vessel-position data showed that at least 10 MSC container ships and five Maersk ships had either recently called or were planning to call in St. Petersburg in the Baltic Sea or Novorossiysk in the Black Sea. MSC and Maersk are the largest and second-largest ocean carriers in the world, respectively.

As of Wednesday, AIS data showed MSC’s calls to Russian ports were down to three ships: the 2,604-twenty-foot equivalent unit MSC Lara, arriving in Novorossiysk on Thursday, and the 2,490-TEU MSC Pamira III and 2,250-TEU MSC Andriana III, which recently departed Novorossiysk.

Maersk has now completely ended its Russian service. It announced the cessation “of all vessel operations” on May 4.

According to Alphaliner, “The 3,596-TEU Voga Maersk made its last call at St. Petersburg on April 29. Earlier that week, four of her sister ships — the Venta Maersk, Vayenga Maersk, Vuoksi Maersk and Vaga Maersk — called to evacuate empty containers to North European ports.”

U.K.-based data provider VesselsValue tracks the weekly frequency of container-ship calls at Russian ports. In the nine weeks since the invasion (through the first week of May), weekly calls were down 38% compared to the nine weeks prior to the invasion.

The drop was driven by a 55% plunge in calls to Russia’s European ports. There were just four calls to Novorossiysk during the first week of May, according to VesselsValue. That’s less than a third of the pre-invasion weekly average.

Not only is the number of calls sinking, but the average capacity of remaining vessels is shrinking with the wind down of Maersk and MSC services that deploy larger ships. Using ship-position data, SONAR Container Atlas shows that the capacity of container vessels destined for Russia has fallen to roughly one-sixth of pre-invasion levels.

The volume of bookings (made via the booking data source for SONAR Container Atlas) is likewise around one-sixth of its pre-invasion levels.

And during the month after the invasion, SONAR Container Atlas data shows huge spikes in booked cargo that was not loaded by ocean carriers.

Declined bookings surged to over five times normal levels in the aftermath of the invasion. So, not only did bookings plummet, but a large chunk of Russia’s expected imports never even made it onto the ships. No wonder Nabiullina is concerned about her country’s dwindling consumer goods and components. 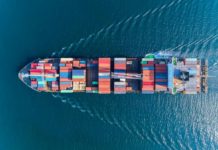