The vessels can carry 800 to 1,000 containers and will each make about 10 trips during their one-year lease period.

Their capacity is small compared to Costco’s overall import volume but reflects the extreme tightness of the container shipping market and delays that have more than doubled delivery times for importers depending on the inland destination.

Major shipping lines are unable to meet commitments, even for customers as large as Costco (NASDAQ: COST), because ports and distribution partners are overwhelmed with freight volumes, forcing vessels to wait at sea for up to two weeks at major ports.

“Containers, trucks and drivers all are impacting the timing of deliveries and higher freight costs. Despite all these issues, we continue to work to mitigate cost increases in a variety of different ways and hold down and/or mitigate our price increases passed onto the members,” Costco’s CFO said.

More than 60 container vessels are currently parked outside the ports of Los Angeles and Long Beach.

Meanwhile, schedule reliability on the trans-Pacific trade to the U.S. West Coast declined to an all-time record low of 33.6% in August, according to data from Sea-Intelligence published Monday.

On-time performance fell to an abysmal 9.9% – the first time this performance measure has dropped below 10% since the company began compiling data decade ago.

Costco officials declined to provide details on who is managing the vessels on their behalf or making arrangements to access busy marine terminals, or which ports are being used.

Costco’s North American imports in 2020 totaled 159,000 twenty-foot equivalent units. So far this year, the retailer has already received 158,000 TEU, according to data provided by ImportGenius.

Taking control of its own vessels

Taking control of its own vessels is one of several contingency measures Costco  is implementing to minimize supply chain disruptions.

It is also ordering earlier, increasing inventories, diversifying its supplier base and product mix, and passing on increased transportation costs to customers.

Packaging is also difficult to secure, and many suppliers are requesting longer lead times to fulfill orders.

Furniture deliveries, for example, are taking 16 to 18 weeks, up from eight to 12 weeks before the pandemic.

The shipping delays, combined with higher foreign exchange rates, have increased the cost of certain imports, such as cheese from Europe and certain apparel items, by 3% to 10%. And the semiconductor shortage has impacted sales of computers, tablets, video games and appliances.

Costco is paying more for many goods

Meanwhile, Costco is paying more for many goods because inputs to make them are more expensive.

The limited availability of pulp has pushed up the price of paper goods by 4% to 8%.

The prices of trash bags, zip-close bags, pet products, plastic dishware and plastic wrap have increased too because manufacturers are having trouble getting enough plastic resins, while prices for aluminum foil and canned beverages have increased about 4% to 6% because of aluminum shortages.

Prices for commodities such as oil, coffee and nuts are at five-year highs. Inflation for fresh food items, such as meat, is in the mid-to-high single digits.

The retailer is limiting purchases of key items such as bath tissue, paper towels, certain types of bottled water and high-demand cleaning products to prevent hoarding as supplies dwindle, Galanti said. Costco, like many retailers grappling with supply chain friction all year, has been ordering staples, toys and Christmas goods much earlier than normal to ensure products arrive on top.

Galanti noted that Costco has more space to stockpile inventory after last year’s acquisition of Innovel Solutions, a third-party logistics provider that for many years provided final-mile delivery of big-and-bulky products for Sears and other businesses.

Most products, however, are turning fast and aren’t being stored for long periods, he added.

Despite the product and transportation inflation, Costco reported a 17.5% increase in net sales to $61.4 billion and a $280 million increase in net income to $1.67 billion, year-over-year. 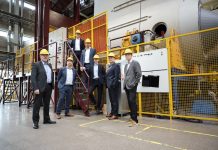