The snow leopards are among several to contract the coronavirus in zoos around the country. The snow leopards NeeCee, Kimti and Meru all tested positive at the Louisville Zoo and recovered from their illnesses late last year.

The animals were treated with steroids and antibiotics, according to the zoo.

“The Zoo has conducted a thorough investigation of all staff that were in close proximity to the fields. There is no evidence to pinpoint the source of the infection,” the zoo said last month after the infections were detected.

Other zoo animals including lions, tigers and gorillas have gotten COVID at zoos, and some cases have been attributed to transmission from handlers.

Some zoos have vaccinated their animals. Eighty animals at the Cincinnati Zoo & Botanical Garden received two doses of a COVID-19 vaccine created for veterinary use as of last month.

The Lincoln Children’s Zoo did not say whether its animals were vaccinated.

“The Lincoln Children’s Zoo remains open to the public and continues to take every precaution to prevent the spread of COVID-19 to humans and animals,” the zoo said. 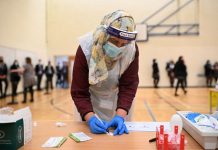