The 161,334-square-foot state-of-the-art terminal expands Royal Caribbean’s presence in the port, increasing the cruise line’s ability to accommodate up to 630,000 guests per year, and enables berthing for some of the world’s largest cruise ships.

When it opens, it will be the first time that Galveston welcomes the line’s Oasis Class, the world’s largest cruise ships. Allure of the Seas will be the first Oasis-class vessel to call at the terminal. To handle the extra traffic, the terminal features technologies like mobile check-in and facial recognition for a seamless arrival experience.

Allure of the Seas is nearly 50 percent larger than the cruise ships Royal Caribbean sails from the port, increasing passenger capacity to over 5,400 people.

“We are focused on innovating across all aspects of our company, especially in our work to advance sustainability in the communities we visit. We deeply value both the oceans we sail and the communities we visit and operate in, and the modern design and development features at our terminal in Galveston will work in service of both,” said Jason Liberty, Royal Caribbean President and CEO.

The Port of Galveston

The Port of Galveston entered into a long-term public-private partnership with Royal Caribbean in 2019 in which the cruise line would build the terminal and then lease it from the port for 20 years with four 10-year options. The opening was originally planned for opening in 2021, but the pandemic delayed many projects related to cruising.

The new terminal will rely on 30,000 square feet of on-site photovoltaic solar panels, enabling self-sufficient energy usage. Any remaining energy not used by the terminal will be sent to the local power grid. Carbon emissions are being offset through the purchase of carbon credits.

The project also prioritized using materials that produce less carbon based on energy used and the transportation process.

The new terminal is also on track to become the first in Texas to achieve LEED Gold certification, expected to be awarded within the first two quarters of 2023. The Galveston terminal marks the cruise company’s fourth LEED certified facility and its first Gold certified. 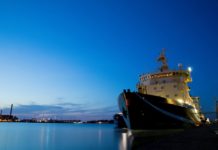 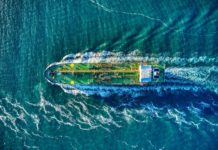