A new class notation from DNV GL attests to special fire detection and firefighting measures implemented on board a containership, says an article published on their website.

Ship of the Year award

At the time of her launch in March 2019, the 23,000+ TEU MSC Gülsün was the largest containership in the world.

While size records seem to be made for the short term only, the ten sister ships of the MSC Gülsün class have more to show for than pure dimensions: at the Seatrade Maritime Awards International 2020 in Shanghai, China, on 6 November 2020, the sister vessel MSC FEBE won the “Ship of the Year” award for setting new standards in terms of efficiency, environmental impact, sustainability, adoption of new technology, safety and security.

Commitment to safety and the environment

At a time in which the shipping industry is undergoing what may be one of the most dramatic changes in its history, these are attributes that highlight a new paradigm in shipbuilding.

“The ‘Ship of the Year’ award underlines our commitment to setting and supporting new trends in containership design. This ship class not only sets a new capacity record but also excels in environmental performance and safety. While crew and cargo safety are our top priorities, maximizing efficiency and minimizing the environmental footprint of our fleet are equally important to us.”

MSC FEBE was also among the first vessels to receive a new class notation created by DNV GL specifically for containerships, which attests to fire protection features on board that go beyond the SOLAS requirements.

Standard firefighting equipment on board is usually not sufficient to fight a fire spreading across several containers, Jefferies stresses.

“This way, a container fire can easily turn into a catastrophic event that is extremely difficult or even impossible to contain or extinguish.”

Furthermore, after suffering major fire damage a larger vessel and its cargo may be difficult to recover or find a port of refuge, Jefferies adds.

“And the costs caused by damage to people, cargo, the vessel itself and the environment could be immense.”

A number of technological advances in recent years have greatly improved the available options for improving fire safety on board, both in terms of fire detection and fire control, says Arne Schulz-Heimbeck, Programme Manager for Containership Development at DNV GL.

“Temperature scanning systems can be used to identify containers which are heating up relative to the surrounding ones as early as possible and take appropriate steps to contain the fire inside before it causes major damage. Powerful water jets can be installed in suitable locations from where they can cover the entire deck area and pinpoint any row of containers to cool them down or even extinguish the fire. In addition, there are water-powered, self-drilling firefighting lances that can be used to extinguish a fire inside a container (HydroPenTM), and other advanced fire containment devices.”

When ordering a new series of 23k container vessels in 2018, MSC decided to make an extra investment in improved fire safety on board their new vessels.

“It was important that everything we fitted will serve a clear purpose towards increased fire safety,” says MSC’s Giuseppe Gargiulo.

“We considered the investment cost as a second priority in this case.”

Quite a bit of inspiration regarding the methods and options came from the offshore industry, Gargiulo adds.

“We used whatever on-board experience we could draw on. We definitely wanted to take a bold step forward instead of expanding incrementally on existing approaches.”

DNV GL joined MSC in this project to provide advisory services. The two companies carried out dedicated hazard identification workshops to make sure that whichever means of fire detection and firefighting they chose for the new vessels would be both adequate and efficient.

Firefighting systems should be ship-specific

The hazard identification workshops primarily focused on keeping the crew out of harm’s way by enabling firefighting operations that wouldn’t require the presence of crew directly at the fire site.

It became clear during the workshops that early fire detection should be given a high priority to avoid loss of control.

A number of fire detection and firefighting systems were discussed, and the systems most suitable for the ship layout were chosen for MSC FEBE and her sister vessels.

The equipment includes a thermal camera system covering the entire deck area to detect containers heating up, and a water jet system capable of covering the full length and width of the deck to cool or even extinguish fires developing in deck containers.

These choices had consequences for the overall design and layout of the vessels. For example, the capacity of sea chests, pumps and other equipment had to be adequate for the water lifting height and power required to spray the water far enough. The qualifiers indicate that the ships provide additional fire protection for the container cargo area (C), have undergone a hazard identification assessment (HA), and meet enhanced requirements for fire detection (FD) and firefighting systems (FF), as well as those for firefighting by container hold flooding (HF) with involvement of DNV GL’s Emergency Response Service, ERSTM.

The FCS notation defines a function-based set of options for dealing with container fire incidents on board but leaves the choice of specific equipment to the experts developing a solution for a given ship.

The modular concept of the class notation provides enough flexibility to select one or several measures for detecting and/or fighting fires in holds and on deck. 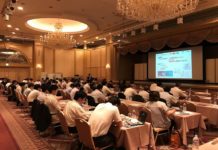