According to an article published in Riviera Maritime Media, DNV GL has granted AiP for an emissions-reducing windscreen to be fitted on ultra-large container vessels.

A bow-mounted wind resistance-reducing screen for ultra-large containerships, which reduces CO2 emissions by an average 2%, has been granted approval-in-principle by classification society DNV GL. The device, co-developed by Mitsui O.S.K. Lines, Ltd. (MOL) and Samsung Heavy Industries, was installed on the bow of containership, MOL Marvel, and tested during service on Asia-North America East Coast routes.

Data were compared between two sister ships with and without the windshield installed on the bow. The tests then determined the change in performance due to reduced wind resistance.

According to MOL CEO Junichiro Ikeda, the results confirmed about 2% average CO2 reduction after installing the windshield on the bow and sailing at 17 knots per hour, compared to operating an identical vessel at the same speed without the device installed. 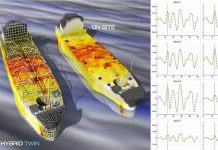 Mfame Team - June 15, 2017
0
HH Ferries Group has received the prestigious Baltic Sea Clean Maritime Award 2017 at the 8th annual forum of the EU Strategy for the...
Powered by Pojo Software Pvt.Ltd
This website uses cookies to improve your experience. We'll assume you're ok with this, but you can opt-out if you wish.Accept Read More
Privacy & Cookies Policy
Necessary Always Enabled