Reports confirm that the Australian police have seized a shipment of silicon bra inserts and art supplies worth over $1 billion Australian dollars.

More than a quarter of the seized meth was found “inside thousands of silicon bra inserts amongst the consignment of 86 boxes,” according to the federal police.

A special focussed police operation on how illegal drugs travel from Asia to Australia lead to the drug bust.  Investigators worked with Australian agencies as well as Chinese authorities to uncover the drugs at storage facilities in four different cities.

Four people have been over the haul, which included 720 liters of the drug.  The suspects include three Hong Kong nationals and one China national.  If convicted, they could face lifetime prison terms.

Police also say that any value assigned to the drugs is now moot — because they won’t be hitting the streets for resale.

A COVID19 Test That Detects the Virus in Seconds! 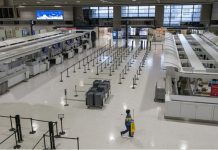 Mfame Team - February 16, 2017
0
Specialist hazardous cargo fire experts have been flown in from London and Austria to assist with extinguishing the fire aboard a container ship docked...
Powered by Pojo Software Pvt.Ltd
This website uses cookies to improve your experience. We'll assume you're ok with this, but you can opt-out if you wish.Accept Read More
Privacy & Cookies Policy
Necessary Always Enabled