Taking a cruise can be a fun vacation (at least when there isn’t a pandemic). But where you’ll find lots of people, you’ll find lots of waste. That includes vast quantities of raw sewage. So, where does it all go? Do cruise ships dump feces into the ocean? And do pleasure boats also dump poop? Let’s take a look

Yes, cruise ships can dump sewage into the ocean

It is perfectly legal for cruise ships to dump treated sewage in the ocean as long as they are three miles offshore. If dumping untreated sewage, the ship must be located at least 12 miles offshore, moving not less than four knots, and using an approved discharge rate. Alaska has additional regulations for dumping near its waterways, says an article published in todayuknews.

That totals to more than a billion gallons of sewage dumped into the open ocean each year, Gizmodo reports. That’s 10 backyard swimming pools’ worth of sewage each week from a 3,000-person cruise ship producing 150,000 weekly gallons of sewage, Friends of the Earth adds. In addition to human waste, sewage includes water from laundry and dry cleaning, sinks and showers, spas and medical sites, and photo labs.

Dumping is allowed by the International Maritime Organization, which recognizes that raw sewage in the ocean “can create a health hazard.” And according to Oceana, cruise ships don’t need to have permits to dump and don’t need to report the amount of sewage they dump.

Ships can hold their sewage until returning to shore. They have “marine sanitation farms,” which treat the water part of the waste so it can be released into the ocean, Popular Science reports. Solid waste is held in storage tanks with aerobic bacteria, which begins digesting it while waiting for the return to port.

Most of the pollution in the ocean does come from land sources, such as sewers and treatment plants, but sewage from ships adds to the problem of oxygen depletion and pollution on beaches. People who visit the beach or eat seafood can get sick if exposed to water or seafood contaminated by sewage. The extra nitrogen and phosphorus from sewage allow for algal blooms and lead to oxygen depletion. These conditions can suffocate manatees, coral reefs, shellfish, and fish.

Sewage isn’t the only pollution that cruise ships produce. They also often operate diesel engines to generate electrical power, even when docked. The emissions produced are harmful to human health and the environment. Friends of the Earth points out that an average cruise ship at sea creates more soot in one day than a million cars. Some ships are now able to plug into onshore power to receive electricity in port.

The regulations apply to only ships on international voyages that have 400 gross tonnage or more and carry more than 15 people. Smaller boats often navigate closer to shore, so regulations keep untreated human feces out of rivers, lakes, and “no-discharge areas.”

Boats with toilets are regulated by the U.S. Coast Guard using standards from the Environmental Protection Agency. Any boat with a toilet should also have a waste-treating device (MSD) and/or a holding tank, the Boat U.S. Foundation says. The different system types mean there are differences in dumping allowed from private boats. Certain systems are allowed to dump more than three miles offshore. The United States doesn’t have federal regulations around gray water that comes from sinks and showers, but some states and areas in Canada do.

Cruising has declined during the COVID-19 pandemic, but people considering signing up for a cruise should consider the environmental impacts of taking this sort of vacation. Each time you flush on a cruise, think about how that finds its way into the ocean. 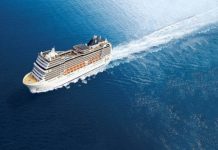 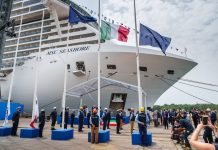 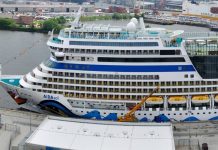