According to a Fox News report, marine archaeologists have recovered ancient treasures from the wreck of the Mentor, a ship used by the controversial Lord Elgin to transport a hoard of artifacts taken from Greece.

The ship, which was carrying a cargo of 17 boxes of antiquities, sank in September 1802 after striking rocks off the island of Kythira. Much of the ship’s cargo, including the controversial “Elgin Marbles,” was recovered in a salvage mission after its sinking. However, many ancient artifacts remained on the seabed, according to Artnet News.

A team of archaeologists recently excavated the shipwreck site, recovering ancient objects that included an ornate gold ring, a pair of gold earrings, and part of an amphora, or jar. Other items recovered from the wreck site include part of a wooden leg and a pulley from the Mentor, according to a statement released by Greece’s Ministry of Culture and Sports.

Thomas Bruce, 7th Earl of Elgin, remains a controversial historical figure on account of his removal of ancient artifacts from Greece, most notably the “Elgin Marbles,” a set of frieze sculptures taken from the Parthenon in Athens. The “Elgin Marbles” have been on display at the British Museum in London since 1817, although the Greek government has long campaigned for their return.

Elgin’s critics have accused him of looting the sculptures from the Parthenon.

On its website the British Museum writes that “the sculptures are part of everyone’s shared heritage and transcend cultural boundaries.”

Other Mediterranean shipwrecks have been garnering in recent years. Archaeologists, for example, recently discovered a hoard of Roman jars on an ancient shipwreck off the Spanish island of Mallorca.

In another project, experts claim to have identified an anchor from St. Paul’s shipwreck on the island of Malta.

Objects Recovered from The Wreck 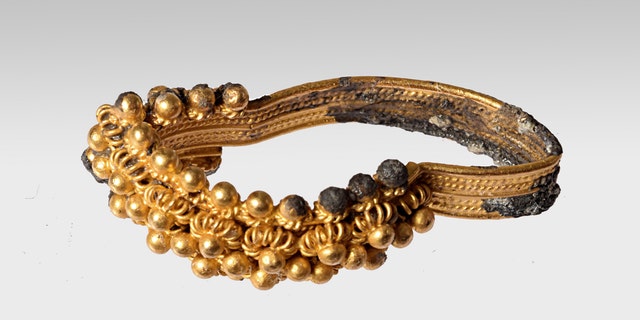 A pair of gold earrings recovered from the wreck site.