The world has never been in a better position to end the pandemic, reports Tinker News quoting the World Health Organisation.

The end is in sight

In his most optimistic outlook yet, the Director General of the World Health Organisation (WHO) believes weekly Covid-19 deaths have fallen to their lowest levels since March 2020.

“We are not there yet. But the end is in sight,” Dr Tedros Adhanom Ghebreyesus said.

The UN-backed group raised the alarm for Covid-19 in January 2020, when it described the virus as an “international emergency”.

Three months later, the virus was officially declared a pandemic, and has since claimed the lives of 6.52 million people.

“Now is the time to run harder and make sure we cross the line and reap the rewards of all our hard work,” Dr Tedros Adhanom Ghebreyesus said.

The WHO has issued a set of policy briefs to ensure governments can increase their efforts to slow the spread of the virus.

These briefs include action on vaccines, infection control, and stopping the spread of misinformation. But the WHO Director General has warned new variants could undo any progress that has been made.

Maria Van Kerkhove is a senior epidemiologist with the WHO, who echoed the Director General’s words.

“We expect there to be future waves of infections, potentially at different time points throughout the world caused by different subvariants of Omicron or even different variants of concern,” she said.

Nearly two-thirds of the global population are vaccinated against the virus, as the WHO encourages people to take up booster shots if they are eligible. 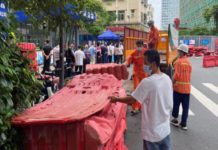