The interim report released by Accident Investigation Board Norway elaborates about the black-out and loss of propulsion of the cruise vessel Viking Sky.

On the afternoon of 23 March 2019, the cruise vessel Viking Sky experienced a black-out
and loss of propulsion in gale to storm force conditions in the Hustadvika area of the
Norwegian Coast. The master immediately sent out a mayday as the ship drifted towards
shore.

On the morning of 23 March, between 0500 and 0904, 18 lubricating oil low level and
low volume alarms were registered by the operational DGs. Each alarm, having been
accepted, cleared within a few seconds.

The bridge team immediately called the engine control room but, at that early stage, the
engineers were unsure of the cause, or causes, of the blackout and therefore could not
estimate when it would be possible to restore power. The officer on watch called the
master, who quickly made his way to the bridge.

Having assessed the situation, the master broadcast a mayday at 1400. He then instructed
the crew to drop both anchors. However, the anchors did not hold, and the ship continued
to drift astern towards the shore at a speed of 6–7 knots. The General Alarm was
activated at 1413 and the passengers and crew began to muster.

On 27 March 2019 the Norwegian Maritime Authority issued a Safety Message on risk
assessment of critical systems which asked “all shipping companies to take the necessary
precautions to ensure the supply of lubricating oil to engines and other critical systems
under expected weather conditions. This should be done in collaboration with the engine
supplier and included as part of the ship’s risk assessments in the safety management
system.”

The safety advice issued by the Norwegian Maritime Authority is supported by the
ongoing safety investigation, with the following recommendation.

All vessel owners and operators are recommended to ensure that engine lubricating oil
tank levels are maintained in accordance with engine manufacturer’s instructions and
topped up in the event of poor weather being forecast. 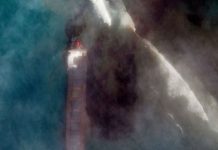