ESB and dCarbonX Ltd have signed a memorandum of understanding to partner on storing green hydrogen in subsurface offshore caverns, says an article published in Renewablesnow.

ESB and dCarbonX will jointly assess and develop subsea hydrogen storage in locations that are adjacent to ESB’s existing and planned infrastructure.

About the signed memorandum

The alliance will also support the development of a proposed Green Hydrogen Valley around the Poolbeg peninsula in Dublin for the production and storage of green hydrogen that can be used to decarbonize heavy transport, shipping, industry, and power generation.

The significant role of renewable electricity

“ESB recognizes that hydrogen produced from renewable electricity will play a significant role in the decarbonization of many sectors,” noted the company’s strategy manager for generation and trading, Padraig O’Hiceadha.

“The large-scale underground storage of green hydrogen is the critical element to Ireland fully exploiting its significant indigenous wind energy resources both for domestic consumption and overseas export,” said Tony O’Reilly, chief executive of dCarbonX, a company based in Dublin and London. 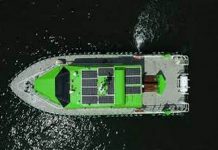