Euronav has become a signatory to the Neptune Declaration on Seafarer Wellbeing and Crew Change, which has been developed by the Global Maritime Forum.

The task force, which is co-chaired by V. Group chairman Graham Westgarth and ONE chief executive Jeremy Nixon, will officially launch during the Davos Agenda Week later this month.

The crewing crisis was brought on last year by the coronavirus pandemic and the subsequent measures governments introduced to contain its spread.

Restrictions on borders and travel, coupled with a disjointed approach and a lack of co-ordination among countries, have made crew changes and repatriations a challenging and often impossible task in several key jurisdictions.

It is estimated that around 400,000 seafarers were stuck at sea.

Despite international efforts to resolve the problem, the crisis endures. Several countries have been reported as strengthening crew change restrictions in recent weeks, in response to an increase in coronavirus cases and the detection of new strains of the virus.

The task force aims to push for the global recognition of seafarers as key workers, allowing them early access to coronavirus vaccinations, and for governments to implement “gold standard health protocols” for crew changes.

It also wants to foster greater collaboration between ship operators and charterers to facilitate crew changes and to bring in the aviation industry to establish airline connectivity between key maritime hubs for seafarers.

Euronav chief executive Hugo De Stoop said the crew change crisis is “the largest ever humanitarian and logistical tragedy facing the maritime sector,” which has “stayed under the radar too long.”

Crew changes “are critical for all shipping sectors and movement of goods,” he said.

The number of seafarers on Euronav vessels who are overdue rotation has dropped from 630 in July to 77 today. 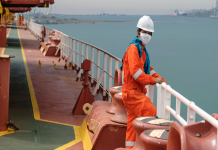 Physical Connection of Ships is the Essence of Shipping