An ultra large container ship was on a voyage when at 2154 hrs the low fuel pressure warning alarm sounded and eighteen seconds later the fire alarm for the engine room activated, reports Gard.

The Chief Engineer entered the engine room to investigate and noticed flames coming from Auxiliary Engine #1 (A/E1). The quick closing valves were immediately activated. The engine room water mist system had failed to operate. Members of the crew tried to investigate the failure of the water mist system but were unsuccessful. Inspite of that, the engine crew successfully extinguished the fire at 2206 hrs using dry
powder extinguishers.

Following an inspection of the engine room, it was decided to restore the main power. A/E3 was started at 2230 hrs and within one minute, heavy smoke was again seen coming from the engine room. the Chief Engineer noticed that the fire in A/E1 had reignited.
He tried to extinguish it using a portable extinguisher but was unable to control it. The water mist system had again failed to operate.

The engine crew was mustered and the decision was made to release the fixed CO2 system. The Chief Engineer released the fixed CO2 remotely from the fire station at 2243 hrs. To make sure that CO2 had released, the Chief Engineer and the 2nd Engineer went to the CO2 room to check. In the CO2 room, they found that several CO2 cylinders and manifold heads remained frost free and warm indicating that some of the cylinders had not been discharged. There was also a bottle leakage alarm that they failed to notice.

Meanwhile the temperature in the engine room continued to rise. At 2300 hrs the 2nd Engineer donned breathing apparatus and entered the CO2 room to release the cylinders manually. Approximately half an hour later the temperature in engine room was seen to be reducing and the fire was later confirmed to be extinguished. The vessel then had to be towed to the nearest safe port for repairs.

Main findings of the investigation were:

Cause of fire and reignition:

Failure of the water mist system:

How to improve by lessons learnt?

Based on the case and the keywords, you should now perform an onboard risk assessment of the incident and the factors which led to it. Bear in mind your vessel’s procedures. You can also discuss the keywords below in order to determine onboard areas/topics for increased awareness: 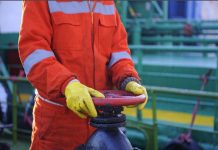 Why Bunker Fuel Analysis Is Everything?