The vessel was safely moored alongside at the port of Pago Pago, discharging its cargo of containers.

The second mate was the duty officer at the time, overseeing the cargo operation. At about 0235(LT), whilst on deck, he tried to close one of the ventilation flaps of the hatch covers.

During his actions, he lost his balance, fell on the side railings of the vessel and eventually overboard on the jetty side. Medical assistance was provided to the crew member, who was eventually transferred to a local hospital. Notwithstanding the medical care received, the second mate succumbed to his injuries.

The safety investigation revealed that the incorrect position adopted by the crew member to close the ventilation louver board was the immediate cause of the accident.

Taking into consideration the safety actions adopted by the managers in the aftermath of the accident, no recommendations to the Company have been issued by the MSIU. Taking into consideration the safety actions already adopted and implemented by the Company, no recommendations have been issued. 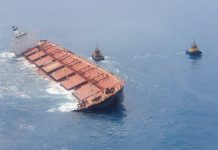