Azov Concord, the first foreign vessel to sail from the port of Mariupol on June 18, will provisionally depart to her home port on June 20 at the earliest, a source in operations told TASS, says an article published in TASS.

“The vessel’s departure has been postponed so far from June 18 to 20. This is because the payment for port services from the ship-owner to the Donetsk People’s Republics failed,” the source said, without giving details to the payment amount.

The vessel is to depart without cargo to the home port, the source added. 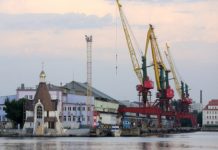