Masters and crews operating along the US/Canadian East Coast must maintain a good lookout for right whales and follow the speed restrictions in force at any given time, reads a Gard release.

The North Atlantic right whale is one of the world’s most endangered species of large whale. It was hunted to the brink of extinction by commercial whalers by the early 1890s and the US National Oceanic and Atmospheric Administration (NOAA) estimates that less than 350 right whales remain.

The North Atlantic right whale is found almost exclusively along the East Coast of Canada and the US. Each autumn some right whales travel more than 1,500 km from their feeding grounds off Canada and New England to their calving areas in the warm coastal waters of South Carolina, Georgia, and north-eastern Florida.

Unfortunately, its habitat and migration routes are located close to major ports and often overlap with shipping lanes, making the whales vulnerable to collisions with vessels.

So – although the days of whaling are long gone – human interactions still represent the greatest danger to the North Atlantic Right whale. This has prompted both Canada and the US to implement various measures to prevent vessel strikes during periods when North Atlantic right whales are likely to be present. 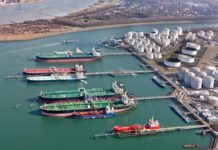