According to an article published in Safety4Sea, the 2019 Global Gas Report focuses on today’s gas trends, on the key factors that explain the recent developments and what will be the future outcomes in the global gas sector.

The natural gas has seen unprecedented development in recent years with more countries and sectors adopting greener methods. Both natural gas production and consumption have grown at record rates. And international trade infrastructure – in the form of LNG and pipeline capacity– is growing at the fastest rate in a decade.

The development goes to deeper structural changes in light of new technologies innovations that continue to bring down costs; The report notes that nearly 70% of proven gas reserves globally are now estimated to be in fields with average breakeven prices of less than $3 per MMBtu. In the midstream, the cost of LNG shipping has declined by 20% on average in the past two decades. And in downstream, the growth of carbon pricing is helping to close the gap between the cost of natural gas and coal.

The slow progress of gas market liberalization and infrastructure development in some parts of Asia is also an ongoing risk to gas competitiveness in key growth markets. Governments in China and India are both taking steps to open access to gas markets. 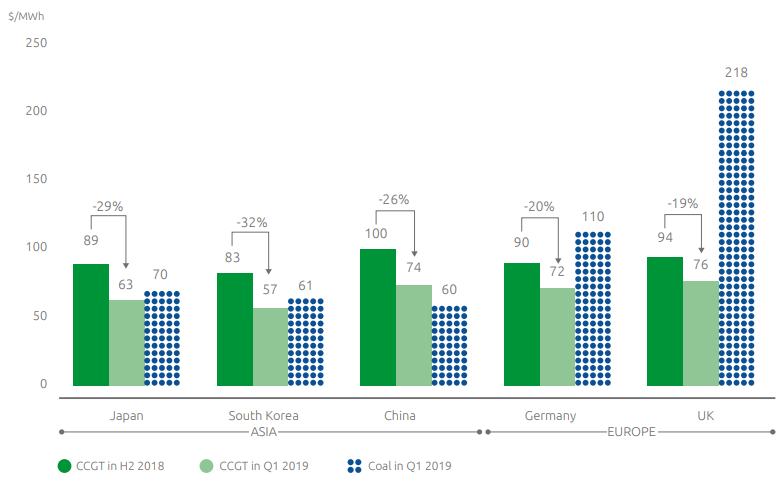 2. Security of supply of natural gas is also improving, due in large part to the rapid growth in the availability of LNG.

The global supply of LNG is rapidly growing and becoming more diverse and flexible, improving the overall security of supply of natural gas

In the last 10 years, 21 countries have begun importing LNG for the first time, resulting to supply becoming more diversified given the addition of Australia and now the US as major exporters, countries that are set to become the second and third largest suppliers of LNG respectively.

In essence, the report notes that 2/3 of international gas trade growth was driven by LNG. 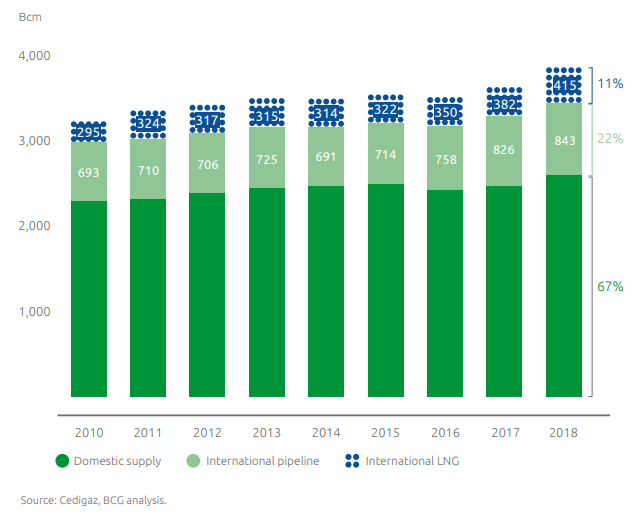 Global gas trade by the year

Up to now, it is obvious that Europe and the Asia Pacific are most dependent on gas imports.

However, despite the LNG market development, there are still barriers to overcome when it comes to the legacy of existing gas contracting structures.

Long-term contracts and oil index pricing have historically provided certainty about natural gas prices. However, given recent price volatility for both crude oil and natural gas, these contracts can now risk locking customers into high price differentials between spot and term prices.

It is also lagging behind LNG infrastructure investment, limiting access to gas in some high potential growth markets. Key regional trends in international pipeline development include: 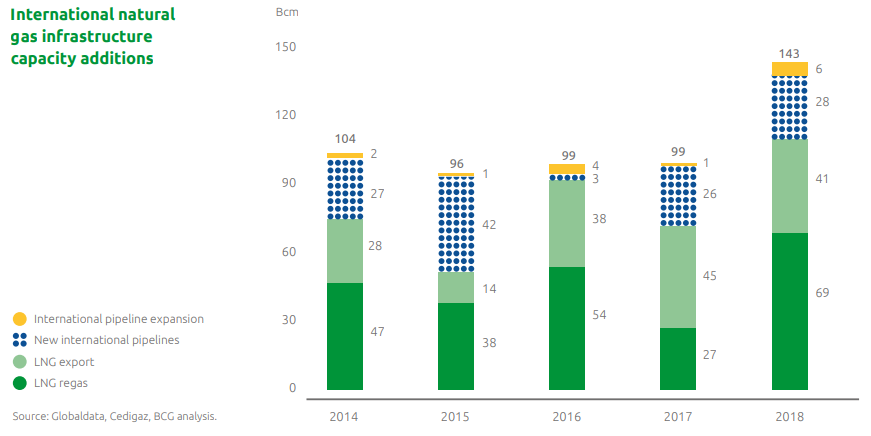 3. Sustainability is a key driver of natural gas consumption growth, now and likely in the future.

The report highlights that China in the past three years has become the fastest-growing market for natural gas due in large part to clean air policies prompting coal to gas fuel switching. 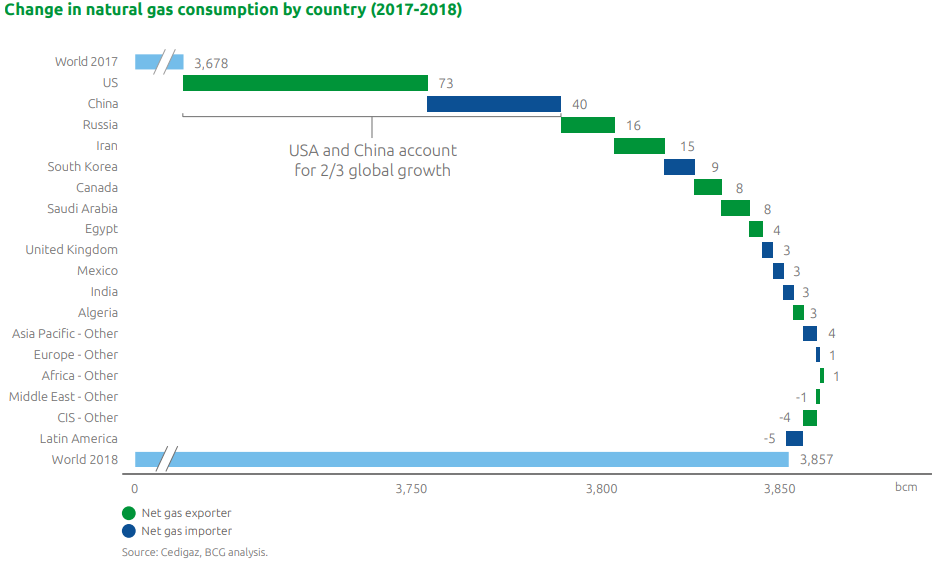 The future of gas in Europe

Natural gas is reaching a crucial point in Europe in light of the coal decrease in power generation, the GHG emissions reduction regulations that are to be in force from 2020 and the changes in supply dynamics.

The UK is a leading natural gas market in Europe, second in size only to Germany. The natural gas supply assists the UK in seasonal energy demand; The weather conditions result in large changes in residential and commercial demand for space heating, resulting in swings in natural gas demand in the range of 8-9 BCM from peak to trough.

This is an important context given the UK government’s recent commitment to achieving net-zero GHG emissions by 2050.

Similarly, France has set goals in the Energy Transition for Green Growth Law of renewable gas reaching 10% of total gas consumption by 2030.

Natural gas for an Italian transport

Italy is the leading market in Europe for the use of natural gas in transport. A new focus of government policy is to incentivize further development of CNG and LNG refueling stations and to integrate the use of biomethane in road transport as a means of reducing the GHG intensity of the transport sector

Greece has the potential to become an LG bunkering hub in the Eastern Mediterranean for three reasons:

For a flexible LNG bunkering supply chain in Greece, subsequent smallscale LNG infrastructure projects are planned at the major Greek ports of Patras, Igoumenitsa, and Heraklion.

In the last 20 years, Austria has become a key hub for the flow of natural gas to and within Europe.

The EU country has the ability to supply gas from Russia and Norway and distribute it to Germany, Italy, Slovenia and downstream toward Croatia, and Hungary. 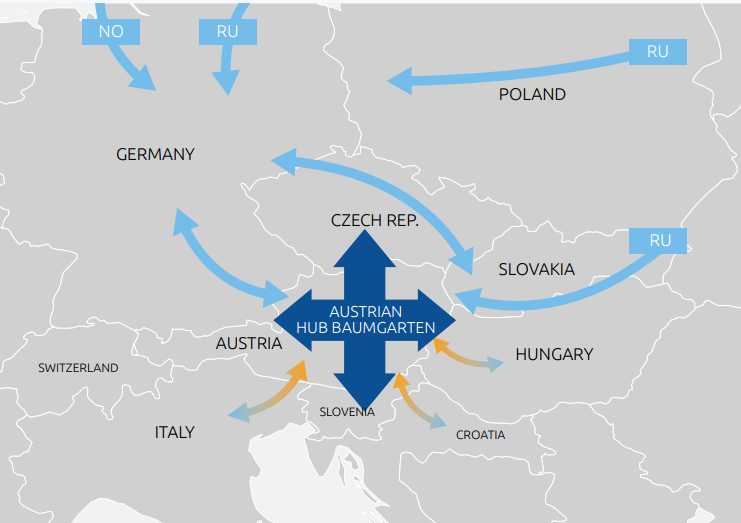 Overall, the report concludes that the potential for future natural gas is possible, but remains uncertain. To sustain growth over the long run, it will be necessary for the global gas industry to build on recent successes by enabling a greater diversification of market growth in the near term while laying the groundwork to ensure the long term viability of gas under any circumstances

Therefore, the report provides recommendations to achieve natural gas development, as such: