The fall in the index

The UP Index declined, and the formation of a pattern known in technical analysis as Head and Shoulders is now confirmed. The probability of a correction of the UP Index is big now. The support line at 125 points should stop this decline, but we think the correction will be smaller. The Head and Shoulders pattern is highlighted in a green circle on the chart below. Last week was unusually calm; no constituent gained or lost in two digits, and most movements were below five percent. The biggest move was a decline of Exmar NV (BSE: EXM), which was 7.7%. 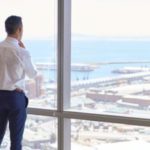