I remember having a conversation with a friend once about the ruins of a massive stone structure. He visited them on a trip to South America. The size of the stones and method of their assembly had him nearly convinced aliens built the ruins. After all, how could primitive people build something like this?

Well, we need to adjust our impression of “primitive people.” All human beings are inventive, finding solutions to problems over time.

For instance, the ancient Greeks had a method of transporting war ships weighing anywhere from twenty to twenty-five tons up-hill, over a landmass about four miles wide. According to Mark Cartwright at the World History Encyclopedia, these “triremes” could hold about two-hundred sailors.

It makes you wonder how these “primitive people” pulled off something so difficult? Well, they used a diolkos. The root “dia” means “across” and “holkos” translates to “portage machine.” It was a paved road to the sea where heavy cargo and ships could be guided across land.

The city-state of Corinth happened to have a famous one of these, (created around the sixth or seventh century BC) which was mentioned by many Greek writers. In fact, its remains are in the process of excavation.

That’s all well and good, but I know what you’re thinking. Why would you want to pull heavy warships over land? Well, for very logical reasons. You just have to put yourselves in the shoes of an inventive Greek in ancient times.

Historian Victor Davis Hanson mentions sailing in ancient Greek times was very different than what we’re used to today. For instance, we call many vessels “ocean liners” in present times. It reflects our idea of sea travel. Ships travel directly from one destination to another over a body of water.

According to Hanson, in A War Like No Other the Greeks didn’t do this. They preferred to hug shorelines for various reasons. First, it was safer. Navigational abilities weren’t as developed as our methods today. Second, ships only carried limited supplies — particularly military ships.

So, ships rarely took a direct approach to distance shores, preferring to make many stops along a route. Hanson also notes many military vessels would be periodically pulled on shore during trips. They were also vulnerable to rough waters and storms.

In other words, sailing could be a dangerous and timely process.

Now, with all that calculated into the equation, what if you were offered a way to avoid a notoriously dangerous coast and save lots of time in the process? Sounds tempting, doesn’t it? Suddenly dragging heavy ships across a narrow landmass doesn’t sound too crazy. 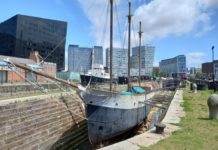 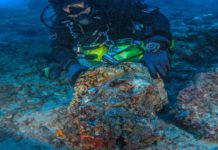