Mama Lee Wachstetter who turned 90 in May is an household name on the Crystal Cruises, as she has been living on the the luxury cruise ship Crystal Serenity for the past 9 years. And as she retired in May she has written a book entitled “I May Be Homeless But You Should See My Yacht”, based on her experience in the cruise ship, says a story published in Forbes.

Mama is the ultimate cruiser, who had a choice when she retired. A senior community? Or a cruise ship? For her, the answer was easy — a cruise ship. In fact, a Crystal cruise ship, which is widely acknowledged as one of the world’s best luxury cruise lines.

Mama and her late husband Mason made their fortune in real estate, and back in 1962 they started cruising together. Over the years, says Mama Lee, “I’ve done 300 cruises, just on Crystal.”

One of the biggest reasons Mama chose Crystal is because of their dancing program.

Crystal Cruises is one of the very few luxury cruise lines that has a Host Ambassador program, in which professional male dancers come aboard with one job and one job only: To dance with the ladies onboard. Their single-minded duties are to dance with the ladies who are cruising solo, and other times, they do the fancy footwork with women whose husbands are on the ship — but don’t like to dance.

Mama has her fill of dancing every single day, and here’s what her typical day, in retirement, is like. “I get up late, then have breakfast. I stay on the ship. Then I have lunch, followed by a nap.” Sometimes she gets her hair and nails done in the spa. And she attends all of the dancing venues throughout the day, so she can trip the light fantastic. On Crystal, there is a daily dance lesson at 1:30 PM, followed by dancing at 5:15 in the Palm Court with the Crystal band, after which there is dancing at 7:45 until midnight in Palm Court. This gives Mama plenty of opportunity to waltz, fox trot, quick step, tango, waltz, rumba, jive and samba.

In the downtime, she does needlepoint with a ferocious enthusiasm.

Then, of course, Mama eats wonderful meals. “I’ve eaten at the same table, in the same seat, for the past nine years,” says Mama. “Nothing’s required of me — the crew on Crystal is magnificent. If I need anything they’ll go off the ship and get it for me…All 650 of the crew members look after me, and I’m never left alone for a minute — and I’ve never been safer.”

There’s even a Mama Lee diet: “I weigh myself ten times a day,” she says, “And I eat half of what I used to eat. I don’t eat bread, and I haven’t used butter in nine years. I get a half-order of food every night.” She adds, “I don’t know how I got so lucky. I don’t have any monthly bills, no house payments, and nothing to worry about.”

Cost of living on a cruise ship

“I pay Crystal every six months in order to get the biggest discount,” she reveals. If you are wondering what the fare is, here’s some information to give you scale: If you were to book a World Cruise, for example, which lasts around 100 days, it costs about $306,345 per person to book the best suite on the ship — the Crystal penthouse.

But Mama’s just in a regular stateroom. And it’s been specifically retrofitted to make it as comfortable for her as possible. “I had five additional clothes racks brought in, along with extra shelving.” Then a crew member also made her a custom earring holder to hold her 150 pairs. She also has a wall of 100 necklaces and rings, because she’s bedazzled by costume jewelry. She says that when her stateroom is being cleaned by the housekeepers daily, the door to her room is open and passengers frequently poke their head in and say, “Can I go shopping in there?”

Crystal Cruises also has outstanding regularly scheduled seminars on how to write your memoirs. I personally took a class, taught by professional writer Joe Kita (who is a Senior Editor at Men’s Health magazine), and his suggestions were super. Mr. Kita actually approached Mama and suggested they turn her life story into a book and today, you can buy it on Amazon.

There’s just one drawback to living well on a luxury cruise ship. Says Mama with a laugh, “I never know what day it is — or the date.” 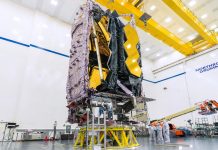 World’s Largest Telescope to be Shipped Across the Ocean