The International Transport Workers Federation (ITF) is calling on companies to step up efforts to help seafarers stranded on ships off China as Beijing continues to informally ban coal imports from Australia, reports Offshore Energy.

The right thing to do!

The industry body is aware that the endeavor would cost millions of dollars, however, the ITF believes this is the right thing to do.

“It’s expensive, but it’s the right thing to do,” the ITF urged in a message to shipping companies asking that they pay the millions of dollars the union group says is required to address the problem.

The call to action comes after MSC Mediterranean Shipping Company secured an agreement to disembark the stranded crew members of the bulk carrier which had been stranded off China since September with 18 crew members.

“MSC has led the way by paying the necessary costs and penalties to charterers and cargo owners in order to rescue the crew of their ship, the Anastasia, and see them rescued from their six-month floating prison via a port in Japan” said International Transport Workers’ Federation (ITF) President Paddy Crumlin.

“We call on all responsible ship owners to follow MSC’s lead and perform these long-overdue crew changes. It will be costly for these shipping companies, but it is absolutely necessary to preserve the health, lives and human rights of these seafarers.”

Over the last several months, dozens of ships and thousands of seafarers have become stranded off the coast of China as Beijing informally banned Australian coal amid a trade spat between the two countries.

The ITF reports that as many as 60 vessels are thought at anchor and unable to unload their cargoes in Chinese ports, adding additional stress to seafarers already suffering from the crew change crisis.

The ITF says a rising number of these seafarers have now been stranded more than a year, and some as many as 20 months.

While it has been reported that China has made some plans to allow at least some stranded Australian coal shipments to unload, the ITF says a long-term solution still required China to introduce protocols to allow for crew changes of all foreign seafarers.

Until China can conduct regular crew changes, it is up to the shipping companies who have a humanitarian duty to preserve the lives and welfare of seafarers employed on their ships by diverting ships to other countries, argues Crumlin.

“China has failed to put aside its bickering with Australia and respond to this man-made humanitarian disaster just kilometres from its coast. Australia, too, has too often put politics ahead of crew welfare. We call on the industry to step up where the governments have failed: show some leadership and get these desperate people off your ships. MSC has proven it is possible,” he said. 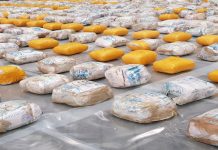