The pilot plant will be set up in Singapore pending successful conclusion of feasibility studies by the end of 2022 and forms another part of the global fuelling jigsaw for Maersk’s raft of methanol-fuelled boxships under construction in Asia.

Maersk has 13 landmark dual-fuelled container vessels able to operate on carbon neutral methanol under construction with delivery dates in 2024 and 2025.

The Danish carrier has been busy securing fuel supplies around the world for this new ship type. 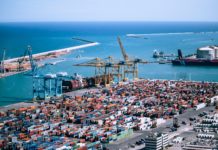