According to the National Transportation Safety Board, The incorrect installation of a single set screw led to the loss of propulsion control  causing the ship to strike a pier at 6.8 knots. Contact between the self-unloading bulk carrier and a pier associated with the Soo Locks, in Sault Sainte Marie, Michigan, resulting in $2.2 million in damage.

The self-unloading bulk carrier was transiting the Upper St. Marys River, west of the Soo Locks, in Sault Sainte Marie, Michigan, with a crew of 25. As the vessel’s speed reduced to 3.8 knots about 0.5 miles from the end of the west center pier, the captain ordered full astern to slow the vessel further. At this point, the captain noticed that the CPP pitch indicator was “erratic,” fluctuating from full ahead, to full astern, to zero, and then back to full astern. He also received a pitch differential, or wrong-way, alarm, indicating that the requested propeller pitch from the helm station did not match the propeller’s actual pitch. He called the engine control room (ECR) to report the inconsistent pitch indicator.

While on approach to the locks and attempting to slow, there was a propulsion problem involving the vessel’s controllable pitch propeller (CPP) system. The vessel subsequently contacted the west center pier at 6.8 knots. Before reaching the lock gate, the vessel’s motion was halted, and the crew moored the vessel to the pier. No pollution or injuries were reported. Damages to the vessel ($1,633,000) and pppier ($573,000) were estimated at $2.2 million. 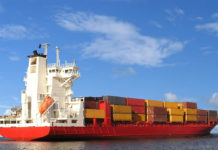 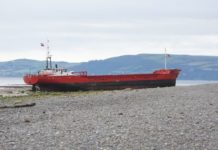