There is a good chance of a small, quick economic recession early next year. Combined with usual freight capacity surpluses at that time of year, it should mean a softening of freight demand for early 2023.

“I do expect a mild—short and shallow—recession early next year,” Costello said. “It should be short, maybe one or two quarters.”

Major headwinds are cost and supplies of energy, the war in Ukraine and perhaps a West Coast dock strike, according to Costello. Last year, annual growth in the U.S. was 5.9%. This year’s economy has been marked by two quarters of negative growth. But he predicted the U.S. would “eke out” slight growth in the fourth quarter.

“That was the party—now we are having the hangover,” Costello said on a recent conference call with ATA members sponsored by U.S. Bank.

Household spending is “not great but it’s not terrible either,” Costello said. Strong wage growth is aiding this sector. But the economy is currently shifting back to stronger payments for services rather than goods, which Costello called “a headwind” for the trucking industry.

“Slight contractions on spending of goods the rest of this year and early next year—but it’s not going to be terrible,” Costello predicted.

The labor market is “very tight,” he said. This is fueling inflation because wages are rising. Employment today is higher than it was pre-pandemic levels. Despite high-profile announced layoffs at some tech and media companies, employment levels are still strong, he said.

In his presentation, Costello highlighted current economic and trucking trends to help explain what it means for trucking overall.

Truck shipment volumes were down nearly 5% this year, while spending was up about 10%, including sizeable fuel surcharges. What that means is shippers are paying more to lock in capacity to move a smaller overall amount of freight.

Top trucking executives tended to agree with Costello’s assessment, even while some were left amazed by the speed of the market-place adjustments.

The trucking industry has basically gone from tons of empty capacity during the COVID pandemic of 2020 to ultra-tight during the economic recovery to again having extra capacity entering what usually is the slowest demand for freight in the calendar year.

Shipments in and out of the Midwest have been the slower, data shows. That’s because of a slow recovery in the auto industry, as well as lesser demand for agricultural products. The worst geographic region has been the Southeast. The Southwest, largely because of energy and cross-border movements with Mexico, has been the fastest-growing region, according to Costello’s data.

“Volumes have been OK, but the theme has been no matter what freight volumes have been, the amount of spending on freight has gone up,” Costello said.

“This industry never ceases to amaze me,” Chuck Hammel, president of Pitt Ohio, the nation’s 15th-largest less-than-truckload (LTL) company, told LM. “It went from overcapacity to a slower demand almost overnight. The pandemic rush is over.”

Hammel emphasized “that is not a bad thing. Less demand is allowing companies to right-size their operation. And by doing so it is keeping their margins healthy.”

That already has been seen around the LTL industry in particular. FedEx Freight, the nation’s largest LTL carrier, has furloughed an undetermined number of workers. Yellow Transportation, No. 2 on the LM list of LTL carriers, is closing about 28 terminals as part of its “One Yellow” transformation. Old Dominion Freight Line and Saia are still in expansion mode but could slow the pace of that growth, depending on growth prospects early in 2023.

“LTLs have sort of flipped the other way,” he said. “Their capacity is off about 1.9% for the year. There are parts of the trucking industry that already are being hit hard,” Costello said, specifically citing those in the spot market.

“There is a lot of pent-up demand for new trucks and trailers,” Costello said.

Trucking just came out of two years—2018 and 2019—that essentially were as good as it gets for the sector. The changing macroeconomy has left industry experts peering intently into their crystal balls, but sometimes the results have been murky and hazy.

Jeff Pape, general manager of transportation and senior vice president of global transportation at U.S. Bank, called the current period “a very interesting time for the supply chain” nationally and around the world.

“One of the most exciting things is there is always something that has changed,” Pape said. “What that has meant is over the last few years, supply chains have come to the forefront.”

Mike Regan, chief relationship officer and founder of TranzAct, a freight bill payment services company, said the next year could be especially challenging for shippers as well.

“We believe that in 2023 companies will want to partner with freight audit payment companies that can help them look at the external transportation facts that could impact their supply chains,” Regan told LM.

For example, the Teamsters’ five-year contract with UPS expires the middle of next year. “That means shippers will want to do some scenario planning to address the possibility of a strike or lockout if negotiations between the two parties becomes contentious,” Regan said.

As for the economic outlook for the rest of this year and 2023, Costello said  households could cut back on spending because of inflation and other factors.

Households have gone from historic levels of savings to their lowest levels since August 2008, Costello said. That will lead to lower levels of spending, he said.

Inventory-to-sales ratios have been rising, but are still below where they were prior to COVID. But that is largely because of continuing tight supply of new automobiles. Overall inventory levels are “not bloated,” Costello said.

“There are still supply chain issues, but the good news is while we’re not back to where we were prior to the pandemic, retailers are working through their inventory levels.”

Factory output increased 5.7% last year, and will be around 3.7% this year. “It’s been holding up nicely,” Costello said.

Trucking companies with large flatbed carriers and high industrial exposure to the housing industry are feeling the pinch, Costello said. Costello is predicting a 20% drop in housing starts, their lowest level since 2016.

Housing is “clearly the worst part of the economy,” Costello said. Higher mortgage rates have sent the housing rates into recession, he added.

Some of this will be offset by the huge $1 trillion infrastructure spending bill, which is just now starting to be doled out to the states. That will help offset housing-related losses, Costello predicted.

Longer term, nearshoring and other industries bringing production home to North America will help trucking. But that will not occur overnight. Some will go to Canada and a lot will go to Mexico, which should help carriers involved in cross-border transport. 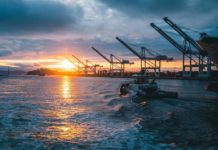 ‘Slicing the Cake:’ Diversification in the Port of Cleveland

Maersk Not Likely To Seek Membership In Other Alliances Post-2M