Mitsui O.S.K. Lines, Ltd. (MOL; President & CEO: Junichiro Ikeda) announced the company’s decision to build an LNG-fueled tugboat. The new tugboat, the first LNG-fueled tug in Japan, will conform to the IGF code (*1) issued in January of this year and is subject to be examined by Japan’s Ministry of Land, Infrastructure, Transport and Tourism.

The tugboat will be built as an element of “ISHIN NEXT – MOL SMART SHIP PROJECT” (*3), and knowledge and expertise gained through the tugboat’s development and operation will be fed back to various types of LNG-fueled ships including the environment-friendly ferry (ISHIN-II) (*4). The construction of this tugboat also reflects MOL’s proactive stance in promoting LNG fuel through technological development of LNG-fueled vessels (*5) and enhancement of safe operation. MOL continually strives to promote and expand its environment and emission-free businesses, seizing opportunities presented by efforts to reduce the environmental impact of the global shipping industry.

(*1) The International Code Of Safety For Ships Using Gases Or Other Low-Flash Point Fuels. The code stipulates safety requirements for vessels using gas and other low-ignition fuels, and was issued on January 1, 2017.

(*2) Dual fueled engines, which run on either A heavy oil or LNG

(*4) The concept vessel of the environmental impact-reducing LNG-fueled ferry. For details, please refer to the press release on December 2, 2009: MOL Completes Concept for Series of New-Generation Vessels.

Artist’s conception of the environment-friendly ferry

(*5) MOL established the Bunker Business Office to accelerate its initiatives on LNG and other alternative vessel fuels, and is taking an integrated approach to entering the business of supplying LNG and other fuels. Please refer to the press release on February 24, 2017: MOL to Restructure Organization. 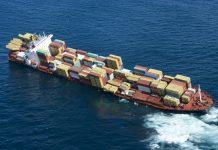 Mfame Team - September 24, 2015
0
https://www.youtube.com/watch?v=fW0_MmEO7o4&feature=youtu.be Katana is an invention made by Israel. It is an unmanned surface vessel (USV) combat marine system for use guarding Israel's coast and growing...
Powered by Pojo Software Pvt.Ltd
This website uses cookies to improve your experience. We'll assume you're ok with this, but you can opt-out if you wish.Accept Read More
Privacy & Cookies Policy
Necessary Always Enabled