Archeologists believe a mysterious object that was revealed by the beach erosion caused by Hurricane Nicole may be a cargo ship dating back hundreds of years.

The object was found buried beneath more than five feet of sand on Daytona Beach Shores on Nov. 29.

On Tuesday, state archeologists told WFTV that the mysterious debris may be left from a cargo ship from the 1800s. The archeologists plan to analyze the material to confirm its age, and plan to examine Maritime Records to potentially identify it.

Officials told WFTV that the cargo ship may have been sunk by a storm while following the coast.

The site was described as “fragile” and officials are reminding curious onlookers that removing anything from the area without permission is a felony, WFTV reported. 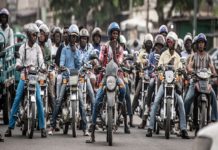 The Country With The Worst Motorcycle Death Rate In The World