The decline in LNG export

Natural gas prices were on a tear, but warmer than normal temperatures and a decline in LNG exports took the wind out of the contract’s sales. There is no tropical disturbance active in the Atlantic Ocean over the next 48-hours that is expected to turn into a tropical cyclone.

Natural gas prices moved higher on Tuesday, bouncing at support and rebounding into the close. Support is seen near the 50-day moving average of 4.88. Resistance is seen near the 10-day moving average at 5.54. Prices are oversold. The fast stochastic is printing a reading of 16, below the oversold trigger level of 20. Short-term momentum has turned positive as the fast stochastic generated a crossover buy signal in oversold territory.

Medium-term momentum has turned negative as the MACD (moving average convergence divergence) histogram prints in the red with a downward sloping trajectory which points to lower prices.

U.S. LNG exports declined in the latest week. According to a report from the EIA, sixteen LNG vessels with a combined LNG-carrying capacity of 58 Bcf departed the United States between October 7 and October 13, 2021 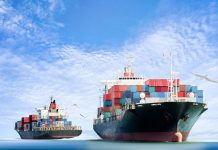