The UK economy will suffer a bigger blow from the global energy crisis than other leading nations, according to international body the Organisation for Economic Cooperation and Development, reports BBC.

The UK will contract by more than any other nation in the G7 group next year, it said.

Growth in the US and the eurozone will be weak, but Germany is the only other major economy expected to shrink.

The OECD forecasts a “significant growth slowdown” globally in 2023. Thanks to the strength of emerging economies, the world economy will grow by 2.2% next year, the OECD’s latest report predicts.

But the war in Ukraine was affecting economies unevenly, the OECD said, with European countries bearing the brunt of the impact on business, trade and the spike in energy prices.

The G7 includes the US, UK, Canada, France, Germany, Italy and Japan. While growth is expected to be weaker in most countries in the group, only Germany and the UK will contract, the OECD predicts. The OECD expects the UK’s economyto shrink by 0.4% in 2023 to be followed by shallow growth of just 0.2% in 2024.

By contrast, last week the UK’s Office for Budget Responsibility (OBR) predicted the UK would shrink by 1.4% next year, although it also predicted stronger growth, of 1.3% in 2024. The OBR said that would lead to the biggest drop in living standards on record.

Earlier this month the Bank of England predicted the downturn could last for two years.

Germany’s gross domestic product (GDP) is expected to fall by 0.3%, the OECD report says. Of the wider group of G20 countries, only Russia, which is subject to economic sanctions, is predicted to fare worse than the UK. 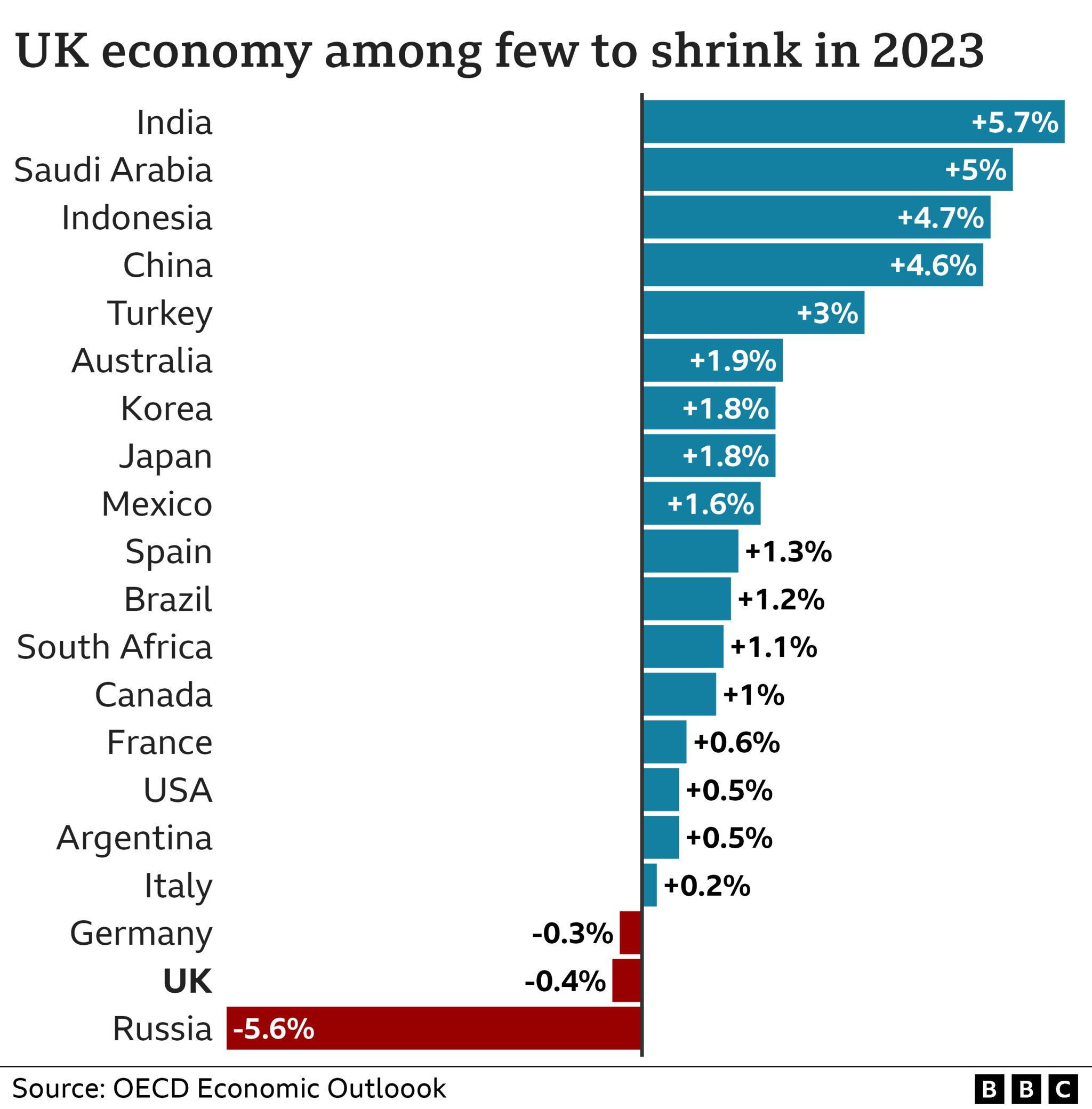 The OECD, an intergovernmental body that focuses on economic policy, lays some of the blame for the UK’s poor performance on the Energy Price Guarantee, the scheme to support household and business energy bills.

While subsidising energy bills reduces the immediate headline inflation rate, the OECD warns that it will add to overall demand in the economy, increasing inflationary pressures in the medium-term. That in turn would require the Bank of England to raise interest rates further and add to the cost of servicing debts.

“Better targeting of measures to cushion the impact of high energy prices would lower the budgetary cost, better-preserve incentives to save energy, and reduce the pressure on demand at a time of high inflation,” it said.

The UK government is moving away from universal support for energy bills after this winter, the prime minister’s spokesman pointed out. “We’re taking a different approach post-April to the energy support, targeting it towards the most vulnerable,” he said.

In response to the OECD’s forecast for the economy, he said this year the UK was forecast to be the fastest growing economy in the G7. “These are challenges that are affecting different countries at slightly different times,” he said. “We emerged from the pandemic faster than many other countries in Europe. But some of these challenges are shared,” he said.

Labour’s shadow chief secretary to the Treasury Pat McFadden said: “We are forecast to be the only OECD economy that will be smaller in 2024 than it was in 2019. This is the Tory doom loop. A low growth spiral leading to higher taxes, lower investment, squeezed wages and poor public services.”

Liberal Democrat Treasury spokesperson Sarah Olney described the OECD forecast as a “damning verdict” and said a succession of Conservative chancellors this year had wrecked hope of growth.

The organisation expects UK interest rates to rise from their current level of 3% to 4.5% next April and unemployment to rise to 5% by the end of 2024.

The cost of paying for help with energy bills showed up on the government’s accounts in October, as households began receiving the first tranche of a £400 subsidy, and the lower £2,500 energy price cap came into effect.

The Office for National Statistics (ONS) estimated that these schemes together cost £3.4bn in October. That pushed up government borrowing – the difference between government spending and tax income – to £13.5bn last month, the ONS said.

Although the figure was £4.4bn higher than last year it was lower than analysts had expected.

The ONS said that borrowing in the financial year to date – covering April to October 2022 – was £84.4bn, although this was £21.7bn less than in the same period last year. 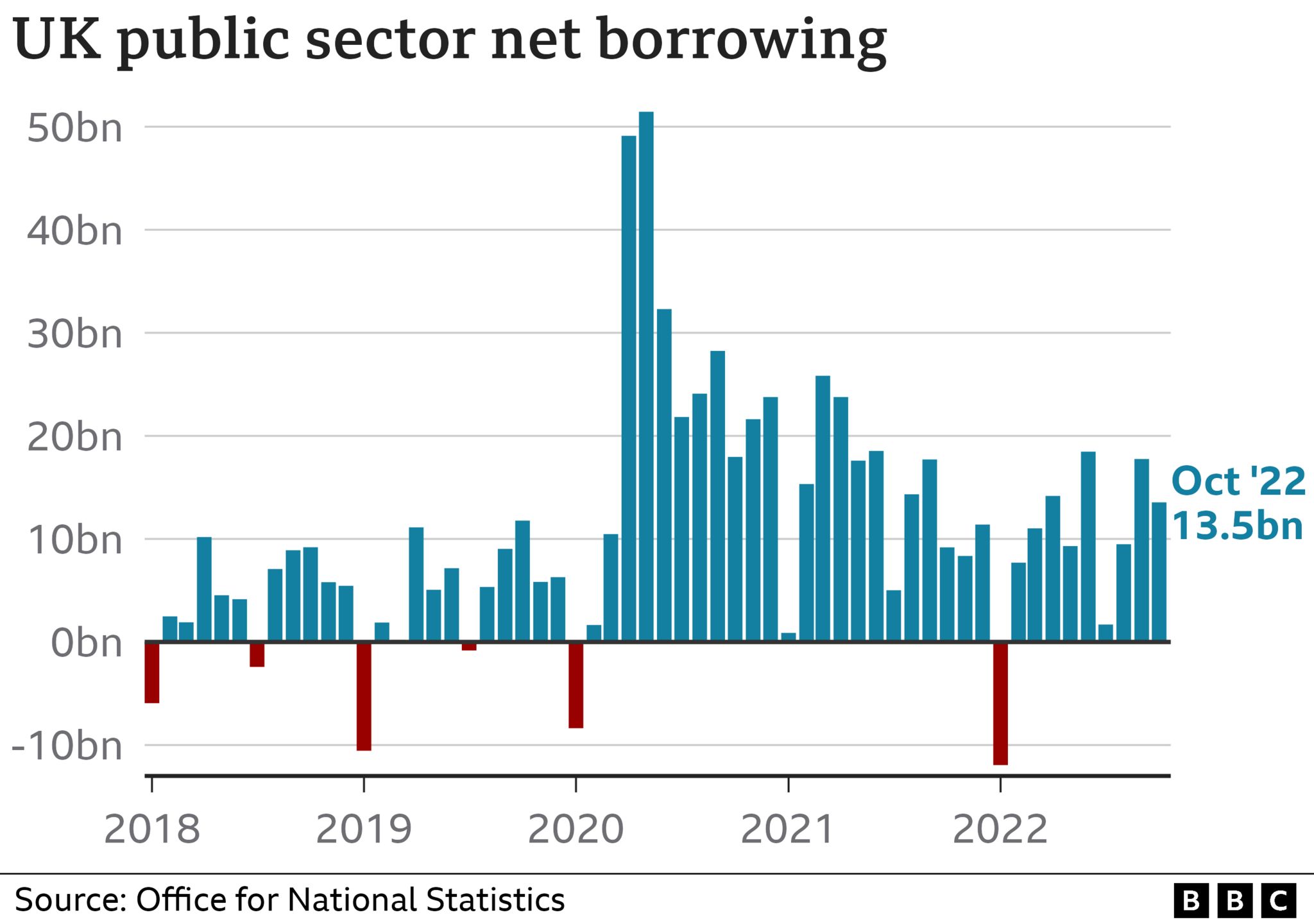