The aircraft had 1 pilot, 1 passenger, and cargo on board. At 1113, the aircraft entered instrument meteorological conditions and struck rising terrain in a box canyon shortly after.

The crash occurred approximately 25 nautical miles east‐northeast of Mayo Airport, at an elevation of 5500 feet above sea level.

The Canadian Mission Control Centre did not receive a signal from the aircraft’s 406 MHz emergency locator transmitter.

Eyewitnesses from a nearby exploration camp arrived at the site after approximately 1 hour.

The pilot and passenger received fatal injuries. The aircraft was destroyed; there was a brief post‐impact fire.

The investigation did not find any technical issues with the aircraft that would have
contributed to the accident. The weather encountered during the late morning on 06 August 2019 was consistent with the forecast for the area. The pilot encountered low clouds and visibilities in precipitation from the scattered convective weather on the flight from Mayo Airport (CYMA), Yukon, to Rau Strip, Yukon, and on the return flight.

The pilot was not allowed to fly if the visibility was less than 5 statute miles (SM) and the cloud height was below 2000 feet above ground level (AGL). The hourly weather and forecast weather in Mayo never went below the weather restrictions placed on the pilot; however, the weather encountered along the route from CYMA to Rau Strip was less than those restrictions.

Alkan Air began a program a few weeks before the accident that required pilots to perform a risk assessment before each takeoff from CYMA to the various remote strips to which they fly.

Although this risk assessment tool has the potential to be an effective safety defence, its use had not matured at the time of the occurrence because it had been introduced only several weeks prior.

Using a prepopulated worksheet would likely decrease the effectiveness of an assessment. If administrative safety defences are not used as intended, it increases the risk that the hazards associated with the flight will not be identified and mitigated.

The pilot’s above‐average performance during training and the company’s confidence in the pilot to perform this type of flying suggests that he had a significant level of confidence and optimism.

The pilot’s decision making was influenced by several biases and, as a result, the flight
departed and subsequently continued into poor weather conditions in mountainous terrain.

The decision to depart Rau Strip to CYMA was influenced by several factors. Because the pilot had recently completed the flight from CYMA to Rau Strip, his decision making would have been affected by his familiarity with the route and, consequently, he likely did not consider an alternate route or discuss it with senior pilots. The pilot was trained to fly the aircraft in instrument meteorological conditions (IMC) and the aircraft was equipped to do so. Encountering low clouds and reduced visibility in a VFR operation in mountainous terrain can be considered an emergency. One option available to pilots is to climb into cloud to a safe altitude.

Shortly after departure from Rau Strip, the pilot began encountering cloud ceilings, which required him to fly, at times, as low as 100 to 200 feet above terrain and in visibilities that were likely as low as 1 SM.

When flying at low altitude, pilots direct a significant portion of their attention outside the aircraft to avoid striking trees. This was likely the case in this occurrence just before the aircraft turned south into the box canyon, where it was observed at near treetop level.

In addition, when pilots direct their attention outside the aircraft, it reduces their ability to refer to paper maps and to the moving map display. Therefore, their primary awareness of the aircraft’s location is based on their recollection of their last known position, especially when they are in a valley or canyon. This recollection can also be compromised when flying at a lower altitude than the pilot is used to and in reduced visibility.

When flying in mountainous terrain at low level, the terrain cautions and warnings are
near‐continuous. As a result, the aircraft is equipped with a “terrain inhibit” switch that can silence the aural alerts. In this occurrence, the TAWS‐B would have been providing alerts to the pilot during significant portions of the occurrence flight. To prevent distraction from these aural alerts, the pilot may have silenced them. These are conditions, acts or safety deficiencies that were found to have caused or contributed to this occurrence.

1. The pilot’s decision making was influenced by several biases and, as a result, the flight departed and subsequently continued into poor weather conditions in mountainous terrain.
2. The high speed at low altitude and low forward visibility reduced the opportunities for
the pilot to take alternative action to avoid terrain.
3. Within the box canyon, the canyon floor elevation increased abruptly within less than
1 NM and the low visibility prevented the pilot from detecting this and taking sufficient
actions to prevent collision with terrain.
4. When the pilot turned into the box canyon, the terrain awareness and warning system aural alerts were ineffective in warning the pilot about the rising terrain either because he had already heard multiple similar alerts in the preceding minutes, or because he had silenced the alerts.

The following actions have been taken by Alkan Air since the accident:

This report concludes the Transportation Safety Board of Canada’s investigation into this
occurrence. The Board authorized the release of this report on 15 July 2020.

Source: The Transportation Safety Board of Canada 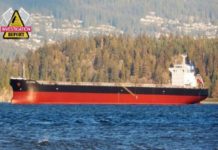