In April 2021, seven incidents of armed robbery against ships were reported in Asia, reads the monthly ReCAAP ISC report. No piracy incident was reported.

Incidents in the Singapore Strait

The ReCAAP ISC is concerned with the continued occurrence of incidents on board ships while underway in the Singapore Strait.

In April 2021, five incidents were reported in the eastbound lane of the Traffic Separation Scheme (TSS) in the Singapore Strait. There was no report of abduction of crew in the Sulu-Celebes Seas and waters off Eastern Sabah, Malaysia in April 2021.

However, the threat of abduction of crew remains high, given the information such as the operation on 3 Nov 20 by the Philippine authorities in preventing a kidnap-for-ransom plan by the Abu Sayyaf Group (ASG) and the military operation on 23 Apr 21 by the Philippines Armed Forces against members of ASG.

In April 2021, seven incidents of armed robbery against ships were reported in Asia. All incidents were actual incidents3. No attempted incident4 was reported. All incidents have been verified and reported to the ReCAAP ISC by ReCAAP Focal Points. 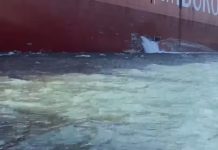