According to Samsung Heavy Industries, it received a 458.7 billion won ($414 million) order from an unnamed shipping company based on Oceania to build four units of very large crude carriers (VLCC) powered by LNG.

The Korean shipbuilder plans to deliver the four vessels in phases by June 2023.

With the above mentioned latest orders, Samsung Heavy Industries won orders to build a total of nine LNG-fueled vessels including five container ships within a week.

Earlier this week, the shipbuilder procured a contract to build five LNG-powered container vessels with an option to build five more ships, which could raise the total value of orders to 2 trillion won.

The ships will be applied with environmentally-friendly technology that meets marine fuel standards such as lower sulfur content and carbon dioxide emissions set by the International Maritime Organization.

They will also be loaded with Samsung Heavy Industries’ self-developed LNG fuel supply system for high-pressure gas-diesel engine ME-GI for LNG use.

According to U.K. shipping industry data provider Clarkson Research Services, Samsung Heavy Industries snatched 26 of the world’s 46 LNG-fueled VLCC orders, taking up 57 percent of total market since it was consigned with the world’s first LNG-powered VLCCs in April last year. 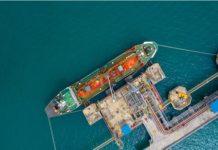